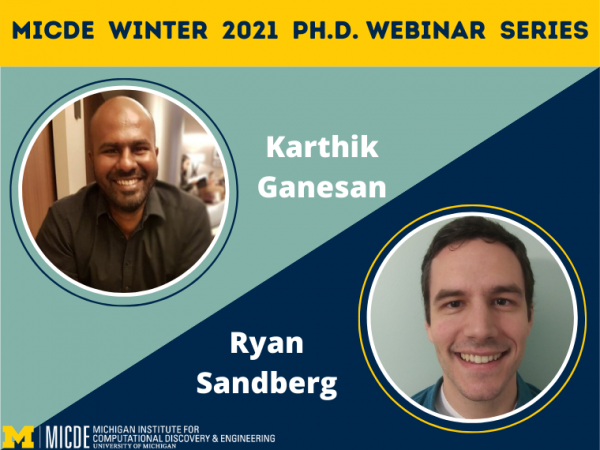 KARTHIK GANESAN: Karthik is a 4th year PhD candidate in Psychology and Scientific Computing. He has a Bachelors and a Masters degree in Biomedical Engineering and a Masters in Psychology. He works in the multisensory perception lab with Dr. David Brang and studies how multisensory integration occurs in the human brain and their mechanisms.

"EFFECTS OF VISUAL SPEECH ON AUDITORY SPEECH PERCEPTION": For quite some time now, the notion of different regions in the brain being highly interconnected instead of being segregated into modules has been widely discussed. There are numerous studies that provide evidence for such an effect where distinct regions in the brain responsible for different functionalities work together to create a unified sense of reality. A case in point would be audio-visual integration, where a person’s auditory stimuli/input is modulated by visual stimuli. One such example is the McGurk effect where the auditory component of one sound, paired with the visual component of another sound leads to the perception of a third sound. How does this effect happen and what are the ways in which the brain handles integration of these different senses? My research explores questions such as whether the brain integrates information from two different senses in a third, unrelated region of the brain or whether the sense of integration is just an illusion created by the modulatory effect of one sense on another. In this talk, I would provide evidence indicating a modulatory effect of visual stimuli on auditory speech perception. Results from complimentary data obtained using two different imaging modalities including intracranial electrocortocographic recordings and functional magnetic resonance imaging would be discussed.

"FARRSIGHT: A FORWARD ADAPTIVELY REFINED AND REGULARIZED SEMI-LAGRANGIAN INTEGRAL GPU- AND HEIRARCHICAL TREECODE-ACCELERATED METHOD FOR THE VLASOV-POISSON SYSTEM": We present a new forward semi-Lagrangian particle method for the Vlasov-Poisson (VP) system. Recently developed methods for the VP system include deformable particles and high-order or discontinuous-Galerkin Eulerian methods. In contrast to these, we do not use any operator splitting and obtain the electric field by summing regularized pairwise particle interactions using a GPU-accelerated tree-code. We remesh and use adaptive mesh refinement to maintain an efficient representation of phase space. We benchmark on several standard test cases including Landau damping and the two-stream instability. We also compare the multi-threaded and single-GPU performance of the method.