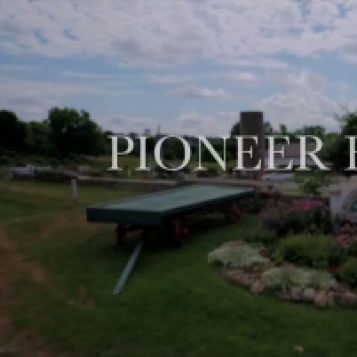 Thornton's documentary, Pioneer Family - On Van Hoosen Farm, recently premièred at the Rochester Hills Emagine Theater; its broadcast première occurred on December 6, 2016, on Detroit Public Television at 8:00 p.m. On Van Hoosen Farm explores how five generations of Taylors and Van Hoosens raised their families and worked the land: "There are countless stories of the families who established the communities we live in today, but seldom is there a story as unique, incredible and engaging as the story of Van Hoosen Farm in Rochester Hills. Settled among the woods and rolling hills east of Rochester on the banks of what would become known as Stony Creek, the story of—first the Taylor family—and then eventually the Van Hoosens is one of survival. But where most pioneer adventures are a tale of survival against the challenges of building a life in the wilderness, the survival story of Pioneer Family – On Van Hoosen Farm is primarily one of four formidable and determined women who defied the prejudices of their time to leave a legacy not just in Southeast Michigan but throughout the world."