What Distinguishes the Department of Film, Television, and Media?

In contrast to a traditional film school or art school model, the Department of Film, Television, and Media integrates critical studies and creative production in film, television, and new media within a large world-class university. Within this department, students can elect courses in studies, production, and/or screenwriting.

Our Undergraduates in Action 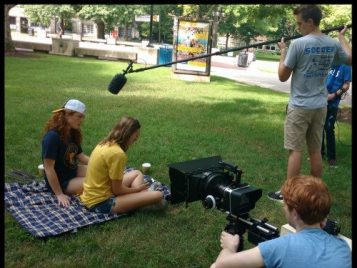 On December 12th and 13th of 2018, before three full capacity audiences in Studio A of North Quad, FTVM 403 Sketch Comedy presented Pls Hire Us,  an original 70-minute sketch comedy show, directed and recorded in front of an audience in the live multi-camera style of Saturday Night Live.

The 19 students of Terri Sarris’ FTVM 403 Sketch Comedy class collaborated on all aspects of the show: writing, producing, directing, editing, and acting in both live and digital short comedy sketches.

Pls Hire Us showcased the independent talents and the teamwork of the class: see photos of the group in millennial pink sweatshirts.

Read more about the details of the show from Director Austen Thomas here. 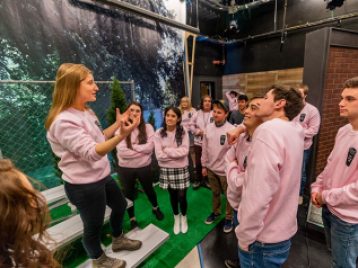 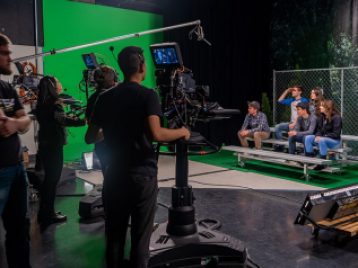 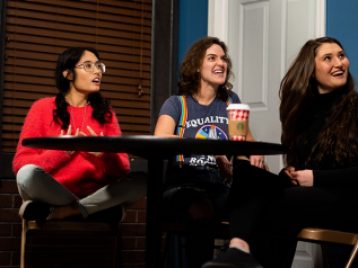 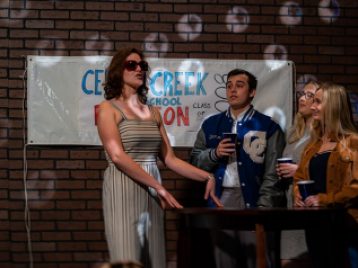 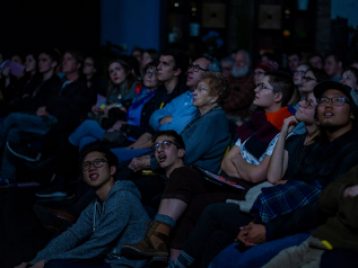 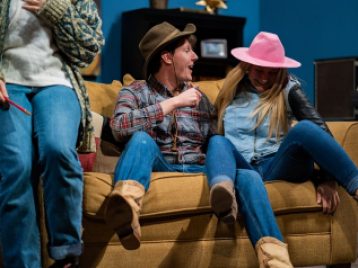 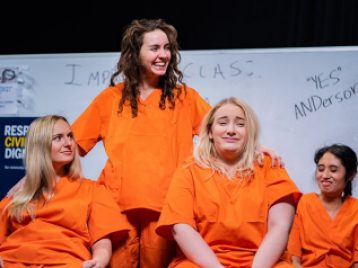 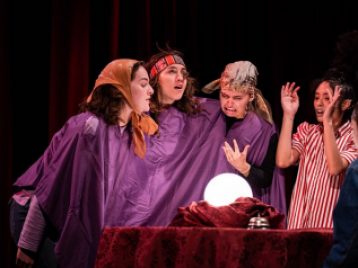 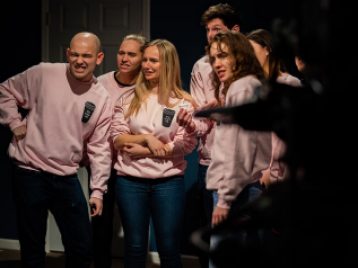 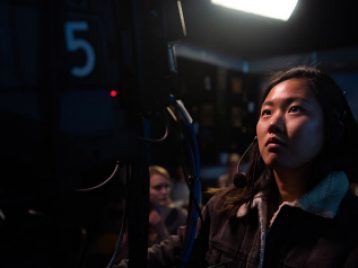 Thanks to FTVM studio staff Rob Hoffman, Rob Gingerich-Jones, and Paul Sutherland, Terri Sarris, to the entire 403 class, and to the student volunteers who helped to make the show such a success.

Take a Peek at Our Classes

Are you wondering what our FTVM classes look like, what kinds of production projects our students create, and what our studies program includes? Click the button below to view snapshots of our students...in the studios and beyond.

Snapshots of Our Students in the Studios and Beyond

What Our Students Say About Us

"Being a part of the Department of Film, Television, and Media department was one of the most meaningful parts of my experience at U of M. I began the major with a love of film - and a serious lack of confidence in my abilities as a filmmaker. After taking a few production classes, and being challenged by my incredibly talented peers and professors, I started to feel more confident about the films I produced. That confidence has enriched many other aspects of my life.

The FTVM department offers students a critical understanding of film and other media's history, theory, and contemporary discourse. More importantly, it offers students an opportunity to explore their creativity, and achieve things they never would have imagined possible."

" When I first started at the University of Michigan, I had no idea what FTVM, the Department of Film, Television, and Media, was. Now, as a rising senior, I can not imagine pursuing a degree in any other department. Before I had even declared my FTVM major, I had felt welcome to and supported by the Department of Film, Television, and Media community. Through FTVM, I have been able to chase my dreams and express myself while receiving guidance and feedback from instructors who genuinely care about the well-being of their students. I also have the opportunity to learn and grow alongside my classmates due to the hands-on and team-based nature of many of our assignments. I feel proud watching the amazing things that my peers create, having worked with them throughout their creative processes. I will forever be thankful to the Department of Film, Television, and Media department, and I only wish I had found them sooner. "

"Being a FTVM major has really allowed me to exercise my passion for film and television, as well as my creative energies, through the variety and quality of classes that are offered in the program. I love learning about all the different facets of filmmaking, from screenwriting to production, theory to history. Receiving a rigorous, well-rounded film education — and having the opportunity to do so at a school like the University of Michigan — has given me both the tools and the motivation to pursue my aspirations to become a writer and director for film and TV. Along with the plethora of stimulating courses that FTVM provides, the faculty are incredibly encouraging, insightful, challenging (in a good way), and in touch with what is happening with the film world currently. The recently implemented speaker series has also been an immense help; hearing industry professionals discuss their own background in making it in entertainment is not only a huge privilege, but also very beneficial in preparing me and my FTVM peers for how we want to shape our careers after college.

The movies I have watched, the scripts I’ve written and studied, the class conversations I’ve engaged in, the people I’ve worked with, and the teachers who have guided me have all been extremely instrumental in making my FTVM experience both valuable and worthwhile."

"I am so lucky to have found the Department of Film, Television, and Media department during my time at U of M. With instrumental help from the FTVM faculty and staff, I became a better student, a better worker, and a better writer. The students here learn to collaborate, create, and grow together as aspiring filmmakers. Plus, there isn't just one discipline for FTVM students to follow; they can specialize in theory, production, writing, or a combination. This was important to me because, even though I want to be a writer, I wanted to receive a well-rounded education, which the FTVM department definitely provided! Thank you, FTVM, for teaching me the ins and outs of film and television, and for helping me to pave my way out west!"