This is an article from the spring 2015 issue of LSA Magazine. Read more stories from the magazine. This article covers the Weinberg Symposium and features Professor Chandra Sripada, Weinberg Institute for Cognitive Science Executive Committee Member, and Professor of Philosophy and Psychiatry. 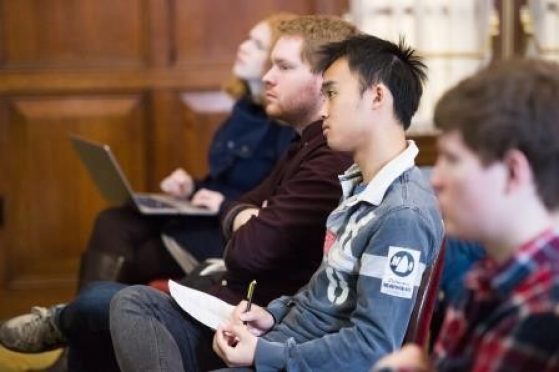 Five people are stuck on the train tracks, and you can help them only by hurting someone else. What do you do? Philosophers have spilled gallons of ink on this “Trolley Problem,” but now they’re using some new tools to get more insight into questions of morality and mortality.
You can't say philosophers are afraid to tackle the big questions.

Chandra Sripada, who teaches in LSA’s Department of Philosophy, the Weinberg Institute for Cognitive Science, and the U-M Medical School’s Department of Psychiatry, lectures on moral philosophy. Specifically, Sripada teaches students about the Trolley Problem, which is a thought experiment so famous in moral philosophy that it spawned its own sub-discipline: Trolley-ology.
In fact, the Weinberg Institute, started in 2014 with a $7.7 million gift from Marshall M. Weinberg (’50), recently sponsored a symposium on the topic, inviting speakers from around the country to share their thoughts.

The scenario goes like this: You’re standing next to a train track when you spot a locomotive approaching. Farther down the track are five people in the path of the train but too far away for you to shout a warning to them. A lever next to you would allow you to divert the train—saving the lives of five people—onto a track with only one person standing on it. If you knew that one person would die if you flipped the lever, would you still do it?

There are numerous variations on this basic scenario, some gruesome, some silly. But they all have the goal of helping people better understand the moral vector of choices made in real life, Sripada says, decisions like those made during wartime (like when civilian casualties are acceptable) and battling epidemics (like how much money to give and when to give it).
“In deciding how we allocate scarce support dollars for medical interventions especially, it’s often the case that there are tradeoffs where inevitably some people are going to die this way or people are going to die that way,” Sripada says. “We end up doing this horrible tallying of how many lives we do, or even can, save.”

Tools of the Trade

For years, philosophers investigated Trolley cases mostly from the armchair. Over the last 15 years, they have been joined by a new group of “experimental philosophers” who use scientific tools such as survey methods and functional imaging scanners to figure out why we make the judgments we do in these scenarios.

“There is a long tradition of philosophers drawing heavily on the natural sciences. The contemporary field of experimental philosophy focuses on one area that is particularly relevant for moral theory: the judgment processes that produce our spontaneous moral intuitions,” Sripada says. “These philosophers want to figure out the inner workings of intuitive judgment — the hidden processes and principles that lead us to judge the way that we do.”
But figuring out why people make moral judgments like these is only part of the problem that philosophers face. Because even if we understand the mental systems and impulses governing our decisions, philosophers still have to figure out whether we should accept those instinctive responses or challenge them.

“For the most part, philosophers aren’t going to be designing the next Hubble Telescope,” Sripada says. “That’s not the kind of work they do. Scientific tools can lay bare the principles that we are bringing to confront these problems, but there’s no microscope that’s going to tell you that this principle is a good one or a bad one.”