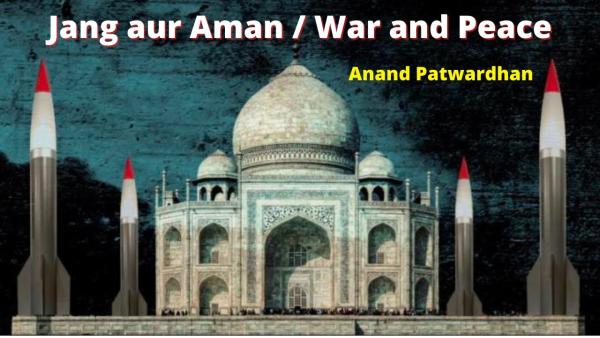 Filmed over four tumultuous years in India, Pakistan, Japan, and the United States following nuclear tests in India, War and Peace is a journey of peace activism in the face of global militarism and war. The film is framed by the murder of Mahatma Gandhi in 1948, an act whose portent and poignancy remain undiminished half a century later. Patwardhan, whose family was immersed in the non-violent Gandhian movement, explores India’s trajectory towards militarism, though the film captures stories of resistance along the way. The film examines the costs being extracted from citizens in the name of national security. From the plight of residents living near the nuclear test site to the horrendous effects of uranium mining on local indigenous populations, it becomes abundantly clear that there is no such thing as the “peaceful atom.” Patwardhan says, “In the moral wastelands of the world, memories of Gandhi seem like a mirage that never was, created by our thirst for peace and our very distance from it.”

“The film itself is a tour de force, beautifully shot and often darkly funny and much more riveting than the dry subject matter might suggest.” - Duncan Campbell – The Guardian

“ War and Peace has a riveting intelligence all its own and earns its epic title.” - Elvis Mitchell – The New York Times

If there is anything we can do to make this event accessible to you, please contact us. Please be aware that advance notice is necessary as some accommodations may require more time for the university to arrange.
Department of Film, Television, and Media
6330 N. Quad
105 S. State St.
Ann Arbor, MI 48109-1285
ftvm.info@umich.edu
734.764.0147
734.936.1846
Sitemap
Facebook Twitter Youtube Flickr