Beheading the Saint: Nationalism, Religion, and Secularism in Quebec 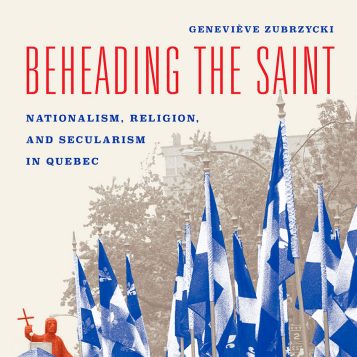 Description from Publisher:  Through much of its existence, Québec’s neighbors called it the “priest-ridden province.” Today, however, Québec society is staunchly secular, with a modern welfare state built on lay provision of social services—a transformation rooted in the “Quiet Revolution” of the 1960s.

In Beheading the Saint, Geneviève Zubrzycki studies that transformation through a close investigation of the annual Feast of St. John the Baptist of June 24. The celebrations of that national holiday, she shows, provided a venue for a public contesting of the dominant ethno-Catholic conception of French Canadian identity and, via the violent rejection of Catholic symbols, the articulation of a new, secular Québécois identity. From there, Zubrzycki extends her analysis to the present, looking at the role of Québécois identity in recent debates over immigration, the place of religious symbols in the public sphere, and the politics of cultural heritage—issues that also offer insight on similar debates elsewhere in the world.