Marisol LeBrón, Assistant Professor of Mexican American and Latina/o Studies (The University of Texas at Austin) 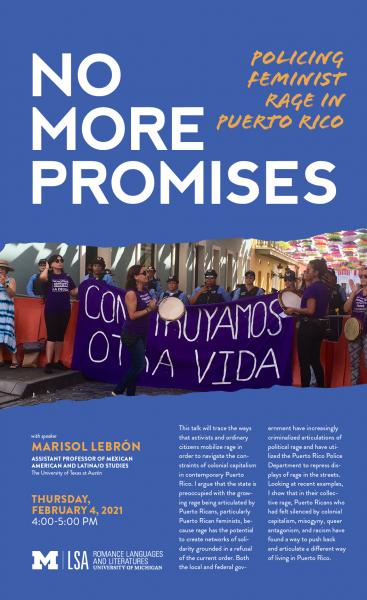 This talk will trace the ways that activists and ordinary citizens mobilize rage in order to navigate the constraints of colonial capitalism in contemporary Puerto Rico. I argue that the state is preoccupied with the growing rage being articulated by Puerto Ricans, particularly Puerto Rican feminists, because rage has the potential to create networks of solidarity grounded in a refusal of the current order. Both the local and federal government have increasingly criminalized articulations of political rage and have utilized the Puerto Rico Police Department to repress displays of rage in the streets. Looking at recent examples, I show that in their collective rage, Puerto Ricans who had felt silenced by colonial capitalism, misogyny, queer antagonism, and racism have found a way to push back and articulate a different way of living in Puerto Rico.