"Detection Thresholds for Non-Parametric Tests Based on Geometric Graphs: The Curious Case of Dimension 8" 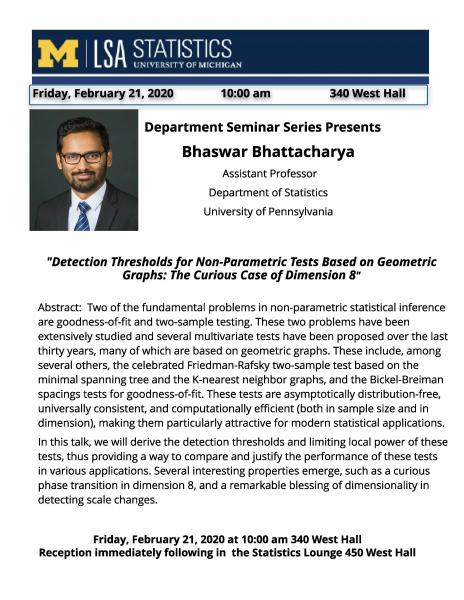 Abstract: Two of the fundamental problems in non-parametric statistical inference are goodness-of-fit and two-sample testing. These two problems have been extensively studied and several multivariate tests have been proposed over the last thirty years, many of which are based on geometric graphs. These include, among several others, the celebrated Friedman-Rafsky two-sample test based on the minimal spanning tree and the K-nearest neighbor graphs, and the Bickel-Breiman spacings tests for goodness-of-fit. These tests are asymptotically distribution-free, universally consistent, and computationally efficient (both in sample size and in dimension), making them particularly attractive for modern statistical applications.

In this talk, we will derive the detection thresholds and limiting local power of these tests, thus providing a way to compare and justify the performance of these tests in various applications. Several interesting properties emerge, such as a curious phase transition in dimension 8, and a remarkable blessing of dimensionality in detecting scale changes.
Department of Statistics
323 West Hall
1085 South University
Ann Arbor, MI 48109-1107
stat-um@umich.edu
734.647.4820
734.763.4676
Sitemap
Facebook Twitter Youtube