Come to the Woods. Fall in Love.

The actors of the Residential College are no strangers to taking bold chances to meet the creative challenges of the moment. After a long break, the Bard is back in nature, for the 22nd season of Shakespeare in the Arb.
by Gina Balibrera

“What makes a live performance special has everything to do with the environment,” says Kate Mendeloff, drama lecturer in the Residential College (RC) and faculty supervisor of the RC Players theater troupe. She is also the creator and artistic director of the RC’s Shakespeare in the Arb (SITA) program and has been staging plays with student actors on the grassy knolls and near the peony beds of the U-M Nichols Arboretum for over 20 years. “Nature provides the best possible stage for interpreting Shakespeare,” she says.

Since 2018, Mendeloff has co-directed SITA with two of her former students, Carol Gray (A.B. ’04) and Graham Atkin (A.B. ’02). Gray relishes the opportunity SITA offers for a wide audience to experience Shakespeare, and how the setting breaks down barriers to understanding and loving the plays. “The audience gets lost in the woods and are sitting in the same grass with the characters,” she says. “The Arb itself is a living museum of botanical wonders.”

The Arboretum and the Matthaei Botanical Gardens have their own parts to play in bringing SITA performances to life. Scouting scene locations and rehearsing in the Arb with her students involves a lot of rolling down hills and tree-climbing. “When you follow the actors into the woods, you’re in their environment,” Mendeloff says. “Basically, the whole idea of SITA is to celebrate nature. The environment is an actor in our play.”

In 2020, when the in-person SITA performance was cancelled due to the COVID-19 pandemic, Mendeloff was crestfallen. It was the group’s 20th anniversary, and Mendeloff wanted to honor the occasion by performing the first play SITA had staged, A Midsummer Night’s Dream. Instead, SITA commemorated the anniversary virtually and everyone held out hope for the following year.

Typically, Mendeloff, Gray, and Atkin hold auditions on April 23, Shakespeare’s birthday, but when the day rolled around a year later, in 2021, it still wasn’t safe to gather. Even if they could find a way to hold auditions, staging a play requires having a cast and crew who can work closely together. Mendeloff realized that staging a whole season of performances would create another set of problems.

“We perform four nights a week for a month and have 40 people together in one or two rooms getting into costume before every performance.” It was clear they had to postpone performances for another season. A disappointment to be sure, but, as the Bard himself said, “The course of true love never did run smooth.”

After a long wait, SITA has returned for the 2022 season to its natural habitat amongst the centennial shrubs and weeping willows of the Arb. Just as they had planned in 2020, they are performing A Midsummer Night’s Dream.

SITA was born 22 years ago, out of Mendeloff’s fascination with environmental theater. She had recently directed RC drama concentration students in Chekhov’s The Seagull, staging the play in the courtyard outside of the Keene Theater in East Quad. “Kate had been talking with the group about the way a performance transforms the space in which it’s held,” Atkin says. After one of the courtyard performances, Mendeloff was asked to direct an outdoor production in the Arb. In June 2000, Mendeloff directed SITA’s first performance, A Midsummer Night’s Dream. She chose this play for its connection to the transformative power of the natural world.

A couple of months earlier, Gray had played Philostrate in an RC Players’ production of A Midsummer Night’s Dream—as she describes it, “a pop-punk staging of the play with a Fairy Queen in drag.” RC Players, as Gray remembers, was “the underdog, punk theater group, with an ethos all about inclusion and creativity.” Acting in the play again in SITA’s first performance, this time in the role of Helena, Gray felt empowered to lead. “Kate involves everyone in the creation of the scenes, and she makes you feel like an expert,” says Gray, who’s been involved in SITA since its inception. “That feeling is addictive.”

This spirit of inclusion and creative acumen has come in handy for RC Players as they navigate the challenges of the current moment. A sophomore at the Ford School of Public Policy, Christopher Wong is the vice president of the RC Players. He was drawn to the group for the same reasons he was drawn to his public policy major: “It’s the study of collective action and problem-solving for issues that involve a lot of people. The great thing about the RC Players is the variety of skills and perspectives that the students across campus bring to the organization.”

As an example, Wong cites a pandemic performance of Dracula he helped transform into a radio drama with other RC Players during 2021. The technical aspects were difficult, the editing endless, and the cast huge and full of enthusiastic new actors. “Our creative spirit is chaotic and a little unhinged,” Wong adds. That spirit was unmarred by the pandemic, though. “There’s a will to see things created,” Wong says. “The demand is there.” 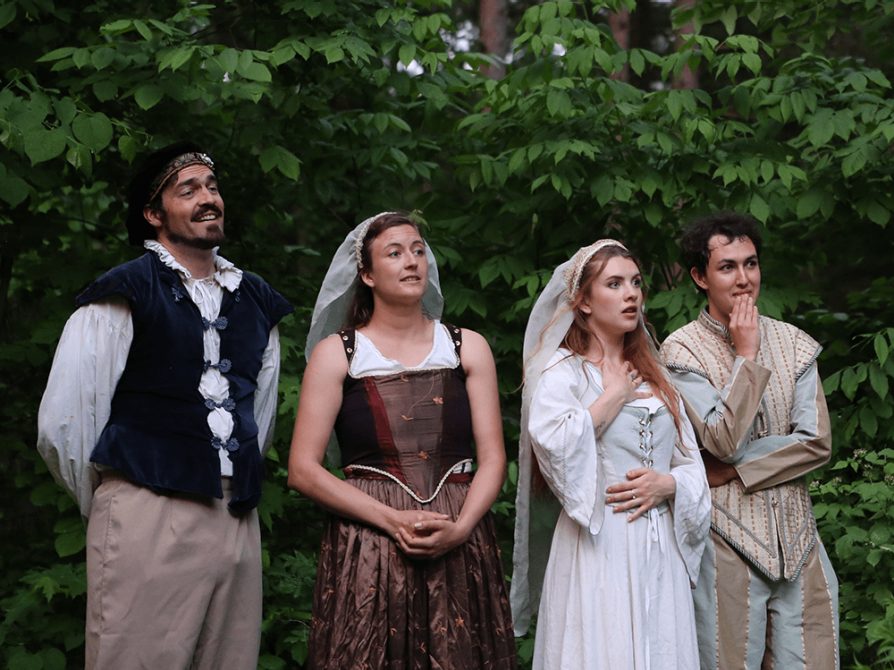 Performers dressed in Shakespearean clothes react to something happening in the production.
In the open air, props are minimal.
This year, SITA celebrated its 20th season alongside the W.E. Upjohn Peony Garden Centennial.
SITA performances take full advantage of the Arb. Actors perch on tree trunks, lounge near flower beds, and roll down hills.
The audience moves with the actors as the play unfolds throughout the 120-acre Nichols Arboretum.
One actor holds a bow while another looks on with an incredulous expression.
A dramatic scene between three actors unfolds as the sun sets.
During SITA, the Arb and its vast panoramas are as much a part of the action as the actors are.
A guitar and banjo quartet performs during a scene.
Each year’s cast is made up of community and university members alike, with over half of the cast being U-M students, faculty, or staff.
Previous Slide Next Slide

The 2022 production of A Midsummer Night’s Dream is a nod to the anniversary performance they could not stage in 2020 or 2021, and to the imperiled planet, a contemporary concern that Shakespeare may also have shared. “Some scholars believe that Shakespeare wrote Midsummer as a climate-change play. [During Shakespeare’s] time they were deforesting like mad to build infrastructure, they began burning coal instead of wood, and they created a microclimate. He experienced a miniature ice age in his lifetime,” Atkin says. “I think what Shakespeare’s doing is writing this love story to the natural world. You can go to the woods and fall in love.”

In winter term 2022, Atkin and Gray taught a class in the RC about environmental theater as a leadup to the long-awaited SITA 2022 season, exploring A Midsummer Night’s Dream as a play about the natural world and the human effect upon the climate.

In typical seasons, SITA performs Midsummer every five years, and the actors and directors find something new in Shakespeare’s lines with each staging. “We’re always challenged to grow and help each other grow, and to do it a new way,” Atkin says. The challenge is no different now, in these more uncertain seasons.

“We’re creative people,” Mendeloff says. “We find a way to make it work.”

While his day job as a professor of neuroscience at Michigan State University may not seem particularly theatrical, Graham Atkin (A.B. ’02) ties his experiences performing and now directing at the RC, as foundational to his career in medicine. With his students, Atkin is working on projects designed to increase medical access for the homeless population of Ingham County and to provide educational outreach for patients and families experiencing dementia.

“The connection to community, and responsibility of a university to its surrounding environment, really started for me in earnest at the RC in our theater classes, in the work that Kate did to ask how theater connects to communities and to space,” Atkin says. “As a neuroscientist, I don’t think the hard sciences are at odds at all with the RC; the way I approach science and medicine is made better by the ways the RC made my mind more open to all the dimensions that play into a scientific question.”