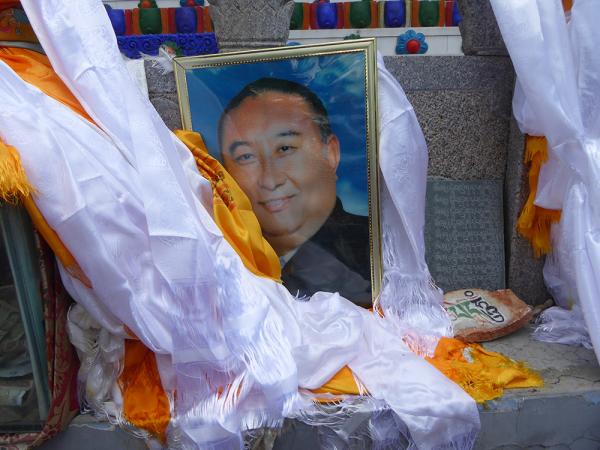 Please note: This live webinar presentation will be recorded and re-aired in the Oct. 20th LRCCS Noon Lecture Series.

In this talk, Professor Makley thinks through the implications of her collaborative work with Tibetans in northern Amdo (Qinghai province) to tell, hear, see and record stories of the late tenth Panchen Lama (1938-1989), the controversial yet beloved Buddhist figure who returned to Amdo in the early 1980s after fourteen years of Maoist detention in a series of triumphant, recuperative tours of rural Tibetan regions. To this day, the absent presence of the tenth Panchen Lama looms large in those regions, where Tibetans lament the loss of his advocacy and voice amidst intensifying state-led development pressures. She takes up Uradyn Bulag's critique to reject the positivist, textualist, and statist premises of "oral history" in favor of a linguistic anthropological approach to narrative as a multimodal and dialogic process of (dis)embodying selves and others in spaces and times. Professor Makley asks, in the context of intensifying surveillance and central state-led censorship, can our Tibetan interlocutors' awkward silences and earnest affirmations, the un- or under-said of their stories about the tenth Panchen Lama, be taken as a politics of refusal that, in the telling, itself works to re-constitute his fugitive presence, and by proxy that of a Tibetan sociality and future currently being erased?

Charlene Makley is Professor of Anthropology at Reed College in Portland, Oregon. Her work has explored the history and cultural politics of state-building, state-led development and Buddhist revival among Tibetans in China's restive frontier zone (SE Qinghai and SW Gansu provinces) since 1992. Her analyses draw especially on methodologies from linguistic and economic anthropology, gender and media studies, and studies of religion and ritual that unpack the semiotic and pragmatic specificities of intersubjective communication, exchange, personhood and value. Her first book, "The Violence of Liberation: Gender and Tibetan Buddhist Revival in Post-Mao China," was published by University of Californian Press in 2007. Her second book, "The Battle for Fortune: State-Led Development, Personhood and Power among Tibetans in China," published in 2018 by Cornell University Press and the Weatherhead East Asia Institute at Columbia University, is an ethnography of state-local relations in the historically Tibetan region of Rebgong (SE Qinghai province) in the wake of China's Great Open the West campaign and during the 2008 military crackdown on Tibetan unrest. The book brings anthropological theories of states, development and personhood into dialogue with recent interdisciplinary debates about the very nature of human subjectivity, agency, and relations with nonhuman others (including deities).

For more information about her research projects, publications, courses, and media archives, visit her website: http://academic.reed.edu/anthro/makley/index.html or her Academia.edu page: https://reed.academia.edu/CharleneMakley.