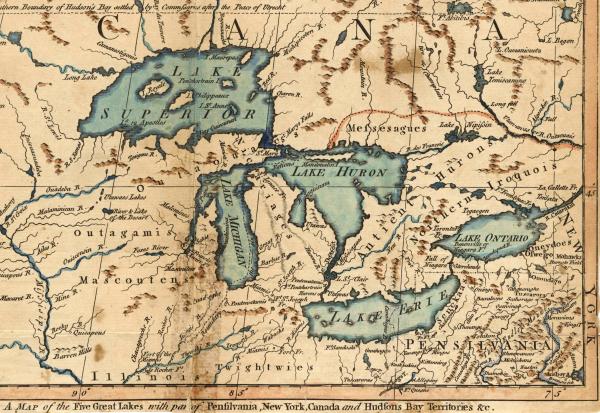 Update 3/11/20: This event has been postponed. It will be rescheduled at a later date.

The French, English, and American literatures of the Great Lakes begin in the sixteenth century. The American continues into the present. Native literatures, in several languages from three major language families, are far older and continue as well. These are true maritime literatures that are too frequently described as Midwestern, but have nothing to do with farming and little to do with cities except as ports.

Lakes literatures are international, multi-cultural, and multi-lingual because the lakes have always been a commercial highway, used for resource extraction and commodity handling by several Native nations and three countries. They were the site of the first métis culture in North America. Their ease of access allowed earlier women writers to experience the frontier without the difficulties and dangers inherent in a trip to the far west, while 19th and 20th century commercial traffic provided work for women in lighthouses and on ships. Their shared border with Canada allowed them to be a vital link in the Underground Railroad, and their maritime traditions of craft skill provided jobs for people of color when remunerative work on shore was closed to them. Lakes literature is a record of lives on the lakes over centuries, tracing war, industrialization, environmental degradation, and recovery.

This lecture is part of the Clements Library's Randolph G. Adams Lecture Series and is co-sponsored by the College of Literature, Science, and the Arts, Great Lakes Theme Semester. Victoria Brehm, PhD, is an author and researcher of Great Lakes literary and cultural history. She recently was awarded the Patrick Labadie Award for Historic Preservation from the Association for Great Lakes Maritime History in recognition of her many years of making neglected and unknown texts about the lakes available to readers.