Passionate Curiosities: Tales of Collectors & Collections from the Kelsey Museum 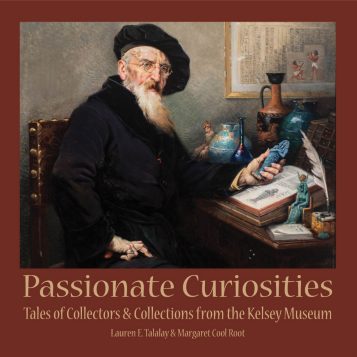 Passionate Curiosities explores the collections held in the University of Michigan's Kelsey Museum of Archaeology through the lens of the people whose intellectual interests, financial backing, and social networks brought artifacts to Ann Arbor from the 1880s to the 1990s. Through purchases and expeditions, these individuals shaped the Museum's internationally recognized antiquities from the ancient civilizations of Greece, Rome, North Africa, Egypt, and the Near East, extensive photographic documentation of these regions from the early 1900s, and significant assemblages of early Christian and Islamic visual culture.An intriguing array of personalities--from archaeologists, missionaries, and diplomats to industrialists, bankrollers, and inventors--weave through these pages. They include Ernst Herzfeld, the eminent Orientalist who helped forge antiquities legislation in Iran; Luigi Cesnola, the rapacious harvester of Cypriot sites; Esther Van Deman, the pioneering feminist and scholar of Roman construction techniques; and Samuel Goudsmit, the renowned nuclear physicist and avid Egyptologist.

World-famous dealers who established standards in antiquities connoisseurship likewise populate these sagas. Readers will encounter Edgar J. Banks, a swashbuckling purveyor of Mesopotamian antiquities and entrepreneur of biblical documentary films; Maurice Nahman, the "lion of Cairo"; and the colorful members of the Tano dealer dynasty in Egypt.

This copiously illustrated book will interest general readers as well as scholars curious about the holdings of the Kelsey, early collectors and dealers, and the history of museums. 216 pages, 282 color illustrations.