Tatyana Fazlalizadeh: To Be Heard 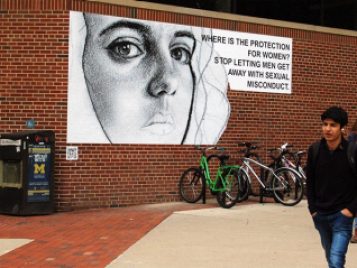 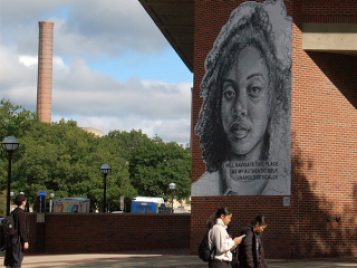 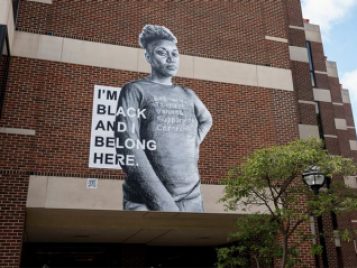 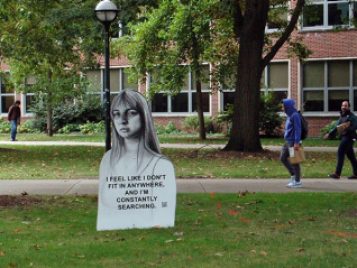 Brooklyn artist and activist Tatyana Fazlalizadeh will be on campus this month exploring race and gender with U-M students through art. The engagements will culminate in a public art installation on some of U-M’s most iconic buildings, using Fazlalizadeh’s drawings of the students to present their experiences and stories back to the public. In addition to the public mural component, Fazlalizadeh will have an exhibition at the Institute for the Humanities Gallery. We hope you can join us. Details below!

Pressed Against My Own Glass, exhibition, September 15-October 21, 2022. Location: Institute for the Humanities Gallery, 202 S. Thayer.

The exhibition Pressed Against My Own Glass will be installed in the Institute for the Humanities Gallery. In this multimedia installation on Black womanhood within the home space, Fazlalizadeh explores her childhood and adulthood within the domestic space and how it connects to the experiences of other Black women and those who had a girlhood. Using paintings, drawings, video, and reappropriated home objects, she examines her experiences of joy, rest, sadness, and fellowship in the home. While doing so, she makes connections to her Black women peers, even those like Breonna Taylor and Atatiana Jefferson who show how racist violence is a threat to Black women even in their homes.

About the Public Mural Project

To Be Heard at the University of Michigan is a public mural project and exhibition by Brooklyn-based street artist, painter, and activist Tatyana Fazlalizadeh. The public mural component utilizes community engagement, public art, and social practice to listen to and amplify the voices of marginalized groups, particularly women and non-white students at the University of Michigan. Through class workshops and interviews, Fazlalizadeh will engage with Black and brown, queer, and women-identified students on the ways that they experience race and gender on campus, exploring how students are treated based on their identities. The engagement will culminate in public art installation across campus using drawings and photos to present the experiences and stories from these students back to the public. Learn more about Tatyana Fazlalizadeh's student engagements.

Tatyana Fazlalizadeh is a Brooklyn-based street artist and painter. She is from Oklahoma City, born to a Black mother and Iranian father. Her work is rooted in community engagement and the public sphere. She makes site specific work that considers how people, particularly women, queer folks, and Black and brown people, experience race and gender within their surrounding environments—from the sidewalk, to retail stores, to the church, to the workplace. Fazlalizadeh is the creator of Stop Telling Women to Smile, an international street art series that tackles gender-based street harassment

Fazlalizadeh has spoken about her work and process at institutions such as the National Museum of African American History and Culture, Brooklyn Museum, New Orleans Contemporary Art Center, Stanford University, and The New School. Fazlalizadeh has been profiled by The New York Times, NPR, The New Yorker, and Time magazine. In 2018, she became the inaugural public artist in residence for the New York City Commission on Human Rights. The impact of Fazlalizadeh's work spread to popular culture when she collaborated with director Spike Lee to base all of the artwork featured in his Netflix series She's Gotta Have It on her work. She also served as the show's art consultant. In 2020, her debut book, Stop Telling Women to Smile: Stories of Street Harassment and How We're Taking Back Our Power, was released from Seal Press.

This project is made possible by a grant from the Mellon Foundation as part of the Institute for the Humanities' multi-year High Stakes Art initiative.