ANN ARBOR—University of Michigan students have returned from three intense weeks of learning, exploring and exchanging knowledge in Brazil, using theater as a tool to promote social change in different communities.

Associate Professor Ashley Lucas and  a group of thirteen undergraduate students traveled to Florianópolis (SC) and Rio de Janeiro (RJ) as part of the Brazil Exchange Program. The exchange is a partnership between UniRio and UDESC universities in Brazil and the Prison Creative Arts Project (PCAP), a program Lucas directs in the Residential College.

Students began their preparation in Ann Arbor this winter. In Lucas’ Theatre and Incarceration course, they learned about prison theatre practices and facilitated workshops in adult prisons, youth detention and treatment centers, and community centers. Lucas then brought the students to Brazil to be participant observers in the theater work not just in prisons but also in underprivileged neighborhoods and hospitals. They learned about what theater can accomplish beyond entertainment in non-traditional settings and why people engage in performance practices in these challenging contexts.

"Our partners teach us about how they do theatre in these settings, and we will also demonstrate the theatre games and techniques we use in our workshops in Michigan prisons," said Lucas.

"What I love about this exchange is the depth of what we are able to do in three short weeks. Because our colleagues here are working in these challenging settings year-round, as we are in the Michigan prisons, they have profound and ongoing relationships with the people in their workshops. They also understand and respect what we do with theatre at PCAP because their work is so similar in spirit."

Lucas explained they enter many difficult spaces in doing this work, but take every safety precaution available to them as they do this. "When we go to prisons, hospitals, and favelas, we go in the company of local professionals who go to these places on a weekly basis, who know and respect the communities in each place, and who introduce us as partners in the work that they are already doing."

WhenElaina Veasey, a rising senior majoring in Theater Arts, heard about the exchange program she was immediately determined to be part of the group.

"This exchange was not only a way to further my education and to see the world, but also it was a way to share my love of theater as an art form and learn about theater from people in another culture," she said.

The students recognize arts and performing as strong tools for social change. Theatre allows them to come up with new ideas, produce new stories in a safe and protective way.

Harper was assigned to work with middle school aged children. "This was my favorite because like the Miller Manor workshops (in Michigan), the kids reminded me of home," she said. "The games they taught us reminded me of the improv based games I played in high school, and although my Portuguese is terrible, I was able to communicate effectively  and have great laughs."

Harper notes the teenage years can be very rough, and just getting a group together and playing theatre games can be a great outlet for many. "A lot of poor neighborhoods don’t have any theatre programs and lack art programs as a whole, which means many people go through life without ever even trying theatre because it’s not an option," she said.

During these past few weeks in Brazil, she has experienced the raw theatre she fell in love with when she was younger. "The type of theatre when it’s just a small group of people wanting to create something great without access to a budget, training, or even a stage. I truly believe that is the best theatre because it teaches a person to be innovative and persevere," Harper said.

Kendall Young, an Acting major in the School of Music, Theatre, and Dance,  just completed her first year at U-M. While in Brazil, she performed in the UniRio adaption of monologues from Flint, produced by Professor José Casas who joined the trip for the first time this year. Casas has led theatre projects in youth detention centers in the United States and writes plays about a broad variety of social justice issues, including immigration, criminal justice, and most recently the Flint water crisis.

Young said the Flint performance night reminded her of the importance of the arts and proved to be a night of passion, power, and promise. "Through redefining the importance of social justice theatre, the performance gave a clear message about the connection of the injustices faced in both countries," she said. "The performance became less about Flint specifically and more about the true issues of injustices towards people of color and individuals with lower income. Theatre is not only an outlet to escape your own reality, but can be a lens to capture a glimpse of someone else’s reality."

Read more about PCAP's students impressions during the Brazil trip: 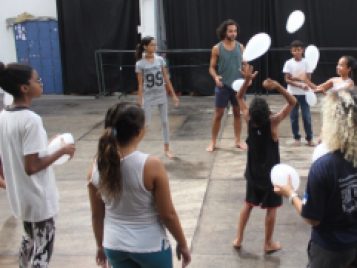 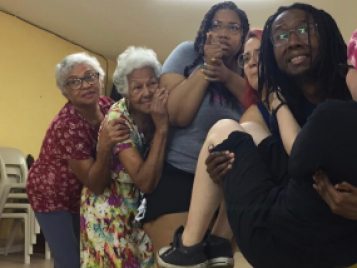