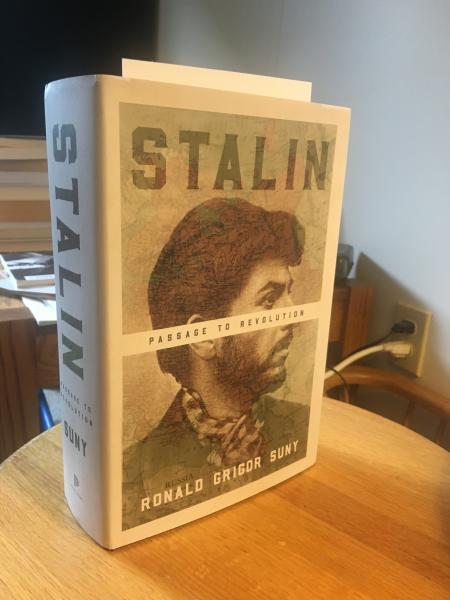 Professor Ron Suny began writing a biography of Stalin from his birth until the October Revolution, 1917, more than thirty years ago. Among the questions he sought to answer were: what makes a revolutionary? Why did Soso Jughashvili turn from Georgian Orthodoxy and romantic nationalism to Marxism and the life of an underground outlaw? In what ways was this first half of Stalin's life formative, and are there explanations here for what he became in the 1930s, a despot and the gravedigger of the revolution?

Ronald Grigor Suny is the William H. Sewell, Jr. Distinguished University Professor of History at the University of Michigan and emeritus professor of political science and history at the University of Chicago. He was the first holder of the Alex Manoogian Chair in Modern Armenian History at the University of Michigan, where he founded and directed the Armenian Studies Program. He is author of The Baku Commune: Class and Nationality in the Russian Revolution; The Making of the Georgian Nation; Looking Toward Ararat: Armenia in Modern History; The Revenge of the Past: Nationalism, Revolution, and the Collapse of the Soviet Union; The Soviet Experiment; "They Can Live in the Desert But Nowhere Else": A History of the Armenian Genocide; Red Flag Unfurled: History, Historians, and the Russian Revolution. With Valerie Kivelson, Suny is co-author of Russia’s Empires, Stalin: Passage to Revolution, and Red Flag Wounded: Stalinism and the Fate of the Soviet Experiment. He is currently working on a book on the recent upsurge of exclusivist nationalisms and authoritarian populisms: Forging the Nation: The Making and Faking of Nationalisms.

Registration is required for this Zoom webinar at https://myumi.ch/kxyWb

If there is anything we can do to make this event accessible to you, please contact us at crees@umich.edu. Please be aware that advance notice is necessary as some accommodations may require more time for the university to arrange.
History
1029 Tisch Hall
435 S. State St.
Ann Arbor, MI 48109-1003
umhistory@umich.edu
734.764.6305
734.647.4881
Sitemap
Facebook Instagram