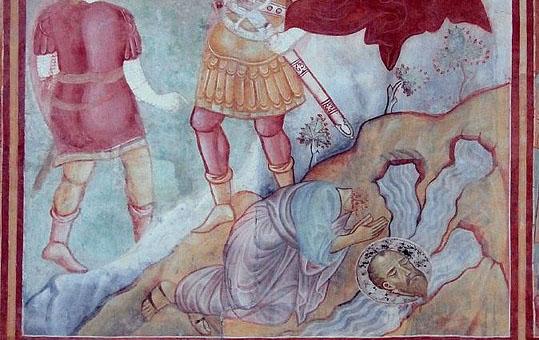 This paper argues that medieval Romans read elements in the city-scape to discover the evidence of sacred history. I use three case studies linked to saints Peter and Paul: divots in the Forum’s paving, an ancient Roman votive offering, and some springs at the church of Tre Fontane. The divots in the Forum’s pavement were damage, which Romans read as as signs of Christian history, claiming them as the knee prints left by Peter and Paul when they prayed for Simon Magus’ defeat. The votive offering is a pair of sculpted footprints. By the thirteenth century, ignoring this origin, Romans read them as Jesus’s footprints, left on the spot where he greeted Peter at the walls of Rome. Both cases display a dominant factor in medieval people’s material imagination: the ability to read the stories they knew in the things they saw. The springs at Tre Fontane are a third kind of thing, a natural phenomenon, and they add a new kind of reading. Tre Fontane was taken as the site of Paul’s decapitation, after which his head bounced three times, each bounce creating a spring. This story differs from the preceding cases in that it was the product of reading both the landscape and images of Paul’s martyrdom, which together suggested information absent from text. Taken together, the three cases indicate that medieval Romans read their city’s urban and natural features in creative, sophisticated and contingent ways.