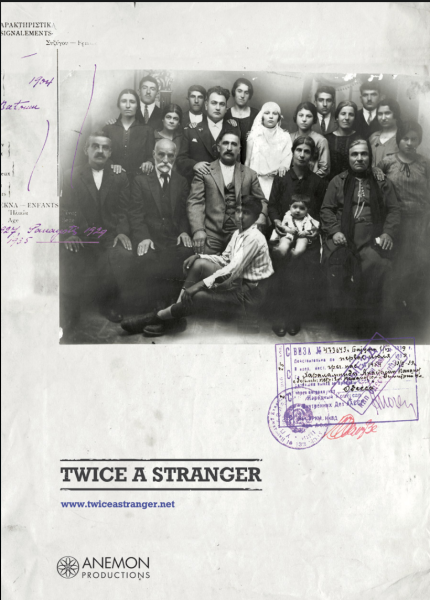 Followed by a discussion led by Will Stroebel,
Assistant Professor of Modern Greek and Comparative Literature

“Twice a Stranger” is about people uprooted from their homes on both sides of the Greek and Turkish border and about their common experience of being “Twice a Stranger.” Part of the multi-ethnic Ottoman Empire in the early twentieth century, by 1924 their world was violently torn asunder. Half a million Muslims were expelled from Greece, and 1.3 million Greek Orthodox Christians were forced to flee their homes in Turkey. The story unfolds through rare archive footage, interviews with historians and testimonies from both Turkish and Greek refugees.

The film inaugurates a series we are planning over the next three years to mark the 1922 Asia Minor disaster and commemorate the 100 year anniversary of the Treaty of Lausanne and Convention on the Exchange of Greek and Turkish Population of 1923, an event with devastating long-term effects that expelled almost 2,000,000 people from their homes. It transformed the Eastern Mediterranean and set the stage for future events of ethnic cleansing. There is much to explore, learn, and think about.
Comparative Literature
2021 Tisch Hall
435 South State Street
Ann Arbor, MI 48109-1003
complit.info@umich.edu
734.763.2351
734.764.8503
Sitemap
Facebook Twitter Youtube