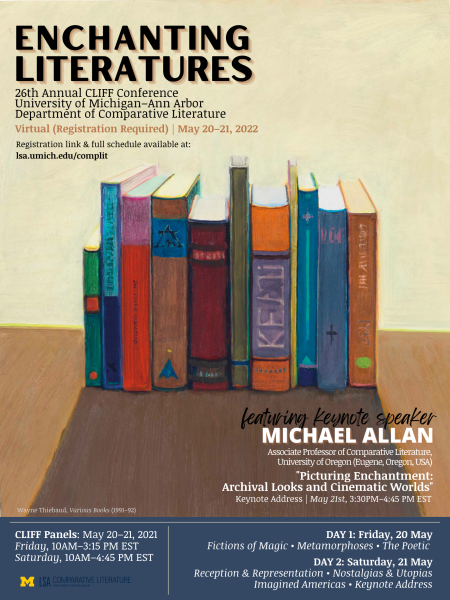 How are our affective encounters with literature, art, and media bound by time, and how are we also—in such encounters—temporally unbound? If literary texts have variously been framed as anticipating, disruptive of, conforming to, producing, inhabiting, and/or responding to axes of time (as “timely,” “untimely,” “ahead of their time,” “nostalgic,” or “avant-garde”), they have likewise been understood as objects of pure fascination, aesthetic experience, and enchantment.

Enchantment, in particular, is frequently understood as an ephemeral experience, unique to the moment of our encounter with the enchanting. We are enchanted by things for brief, passing moments; we sometimes return to a once-enchanting object only to find the glamor it once cast upon us has broken; and at other times, this rediscovery itself—re-encountering a text or encountering it in a new (translated, adapted) form—prompts our re-enchantment.

To mark its 26th anniversary, the University of Michigan Comparative Literature Intra-Student Faculty Forum (CLIFF) organizes a virtual graduate conference that critically and creatively explores the intersection of world literatures, temporalities, and enchantment. We welcomed work that investigates literary and artistic constructions of and responses to notions of temporality and enchantment from aesthetic, historical, industrial, material, technological, speculative, post/colonial, feminist, queer, religious, translational, local and/or global perspectives.
CLIFF 2022 received submissions from graduate students (U-M and beyond) and was open to academic papers from across disciplines that deal with a wide variety of languages and time periods as well as creative and experimental genres.

Michael Allan’s research focuses on debates in world literature, postcolonial studies, literary theory, as well as film and visual culture, primarily in Africa and the Middle East. In both his research and teaching, he bridges textual analysis with social theory, and draws from methods in anthropology, religion, queer theory and area studies. He is the author of In the Shadow of World Literature: Sites of Reading in Colonial Egypt (Princeton 2016, Co-Winner of the MLA Prize for a First Book) and of articles in venues such as PMLA, Modernism/Modernity, Comparative Literature Studies, Early Popular Visual Culture, The International Journal of Middle East Studies, and the Journal of Arabic Literature. He is also a guest editor of a special issue of Comparative Literature (“Reading Secularism: Religion, Literature, Aesthetics”), and with Elisabetta Benigni, an issue of Philological Encounters (“Lingua Franca: Toward a Philology of the Sea”). He is at work on a second book, Picturing the World: The Global Routes of Early Cinema, 1896-1903, which traces the transnational history of camera operators working for the Lumière Brothers film company.

Himani Wadhwa, “Res(crip)ting the Gaze: Envisioning Disability through the Lens of Magical Realism”
Janine Hsiao Sobers, “‘The Terrifying Card of Faith:’ Decolonial Syncretism and the Enchanted Worldview in Alejo Carpentier’s The Kingdom of This World”
Lee Czerw, “The Tyrant as Witch in Early Modern German Tragedy”

Tom Abi Samra, “Circumstantial Poetics: ‘Epigrams’ in the Travelogues of ʿAbd al-Ghanī al-Nābulusī (d. 1143 AH/1731 AD)”
Griffin Shoglow-Rubenstein, “‘The voice / of a drop falling’: N.H. Pritchard and the Temporalization of the Page”
Marianna Hagler, “How to Be Completely Living: Lyn Hejinian’s Gertrude Stein”

Blythe Lewis, “‘My life is a withered tree’: Empire, Ships, and Deforestation in Georgian Drama”
Ben Larsen, “Disenchanting the Banjo: Temporal Reclamation through Spatial Practice”
Ziyang Li, “The Enchanting Gold that Overflows: Gold Rush, Ecology, and Asian American Identity in C Pam Zhang’s How Much of These Hills is Gold”