You are invited to a series of informal translation lunches, sponsored by the Department of Comparative Literature and the Global Ethnic Literatures Seminar at the University of Michigan. A light lunch will be provided.

Reginald Gibbons recently published new translations of Sophocles, "Selected Poems: Odes and Fragments" (Princeton 2008) and he has also translated Euripides' "Bacchae" (Oxford 2001) and Sophocles'  "Antigone" (Oxford 2003).  A finalist for the 2008 National Book Award in poetry, Reginald  Gibbons is widely known as poet, fiction writer, translator, and professor at Northwestern University. He is in residence as Zell Visiting Writer for a week at the University of Michigan, sponsored by the MFA Program.

In conjunction with the translation contest described below, Contexts for Classics wants to establish an online resource for critical feedback on translation projects involving Greek, Latin, or other ancient languages (classical Arabic, classical Chinese, Hebrew, Sanskrit, etc.) or translations from modern language texts, which somehow reflect on, develop, or explicitly resist the Classical tradition.

Send your work to our upcoming blog site and get feedback from editors Matt Pfaff (mpfaff@umich.edu) and Spencer Hawkins (spenseur@umich.edu).

Once we have enough excellent material, we hope to publish a compendium! 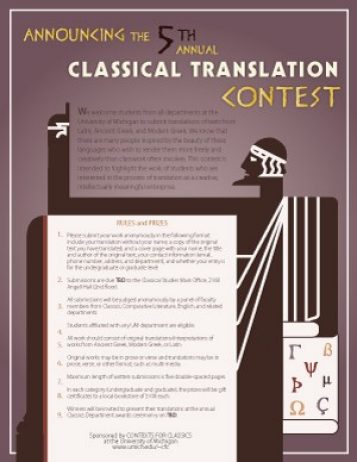 Students from all departments are invited to submit translations of texts from Latin, Ancient Greek, and Modern Greek.

We know that there are many people inspired by the beauty of these languages who wish to render them more freely and creatively than classwork often involves. This contest is intended to highlight the work of students who are interested in the process of translation as a creative, intellectually meaningful enterprise. We welcome students in Classics and other languages and literatures as well as creative writers and students interested in translating Greek and Latin into other media, such as music, the visual arts, screen arts, theater, dance, etc.

Faculty in all departments are encouraged to announce this contest to their classes. We invite graduate students to inform their own undergraduate language and writing classes about this contest, and to enter it themselves.There will be two categories of contestants: undergraduate students and graduate students. Prizes will be given in each category for the first, second, and third place winning entries of original translations from the languages of Greek or Latin of any era. Winning authors will have the opportunity to present their translations and receive their prizes at the annual Classics awards ceremony.
Winners for the Classical Translation Contest: