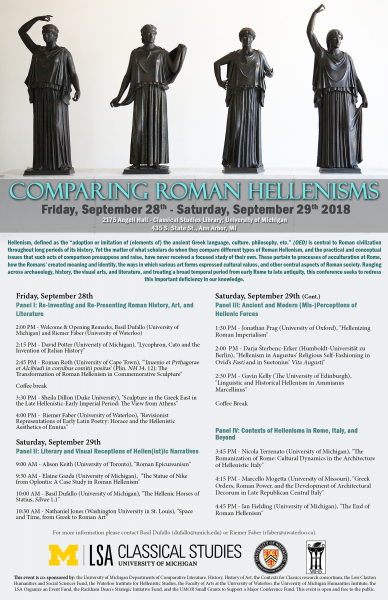 Hellenism, defined as the “adoption or imitation of (elements of) the ancient Greek language, culture, philosophy, etc.” (OED) is central to Roman civilization throughout long periods of its history. Consequently many important aspects of Roman culture and society come into sharper focus through examining the specific forms that Roman Hellenism took at different times, in different places, and in different media. These include changes in processes of acculturation at Rome, in how the Romans’ created meaning and identity, in the ways various art forms expressed cultural values, etc. Yet the matter of what scholars do when they compare Roman Hellenisms, and the practical and conceptual issues that such acts of comparison presuppose and raise, have never received a focused study of their own.

The organizers of this conference have sought papers addressing this problem. The conference features an international list of speakers combining major scholars from outside the University with faculty at U-M. It includes researchers working in a variety of fields (archaeology, literature, history, art history) and historical periods (from Rome’s origins to Late Antiquity) so as to encourage the most wide-ranging discussion possible.

Panel I: Re-Inventing and Re-Presenting Roman History, Art, and Literature

2:15 David Potter (University of Michigan), "Lycophron, Cato and the Invention of Italian History"

3:30 Sheila Dillon (Duke University), "Sculpture in the Greek East in the Late Hellenistic-Early Imperial Period: The View from Athens"

9:30 Elaine Gazda (University of Michigan), "The Statue of Nike from Oplontis: A Case Study in Roman Hellenism"

2:30 Gavin Kelly (The University of Edinburgh), "Linguistic and Historical Hellenism in Ammianus Marcellinus"


Panel IV: Contexts of Hellenisms in Rome, Italy, and Beyond

3:45 Nicola Terrenato (University of Michigan), "The Romanization of Rome: Cultural Dynamics in the Architecture of Hellenistic Italy"

4:45 Ian Fielding (University of Michigan), "The Εnd of Roman Hellenism"


This event is open and free to the public.