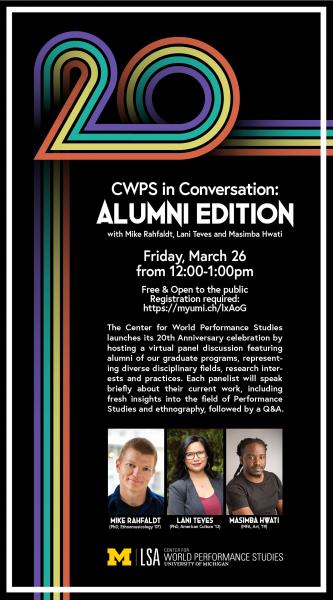 In March 2001, the University of Michigan Center for World Performance Studies celebrated its grand opening, inviting the community to participate in an evening of lectures, performances and food at the International Institute. This month, the Center begins the celebration of the 20th anniversary with a virtual panel discussion featuring three alumni of our graduate programs, who represent the diverse disciplinary fields, research interests and life work of our community. Each panelist will speak briefly about their current work, including fresh insights into the field of Performance Studies and ethnography, and then there will be a Q&A.

Mike Rahfaldt (PhD, Ethnomusicology ‘07) is the Executive Director of Children’s Radio Foundation, where he oversees the international operations from Cape Town, South Africa. Before joining the Children’s Radio Foundation in 2006, Michal taught media and anthropology at the University of Cape Town. As a journalist, he has contributed to Public Radio International, BBC World Service, NPR, and the New York Times.

Lani Teves (PhD, American Culture ‘12) is an Associate Professor in Women’s Studies at University of Hawaiʻi. She has written about Hawaiian hip-hop, film, and sexuality in the Pacific. She specializes in theorizing alternate forms of Kanaka Maoli gender performance and recognition politics. Her approach is informed by Indigenous feminist methodologies and ʻŌiwi epistemologies. Teves is the author of Defiant Indigeneity: The Politics of Hawaiian Performance (UNC Press 2018).

Masimba Hwati (MFA, Art, ‘19) is a multidisciplinary artist working in the intersections of sculpture video performance and sound. Hwati explores the transformation and evolution of knowledge systems that are indigenous to his own background whilst experimenting with the symbolism and perceptions attached to cultural objects, expressed as an art movement known as "The Energy of Objects". His work has been shown in Germany, France, Canada, London, the US, Australia, and Southern Africa. In 2015, he represented Zimbabwe at the 56th edition of the Venice Biennale in Italy.

If you require an accommodation to participate in this event, please contact the Center for World Performance Studies, at 734-936-2777. Please be aware that advance notice is necessary as some accommodations may require more time for the University to arrange.

The Center for World Performance Studies sponsors and cosponsors several special events throughout the year, including performances, public lectures, demonstrations, and roundtables. Our events are announced on our website, and through email and flyer distribution. Please contact us at CWPS.Information@umich.edu if you would like to be on our mailing list or if you would like more information on any of the following events.