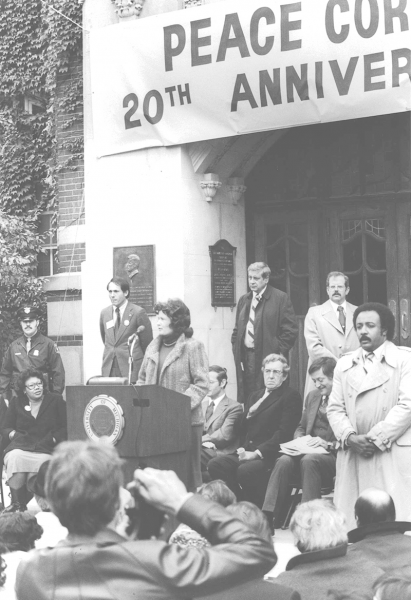 The Sarah Goddard Power & Rhetaugh G. Dumas Progress in Diversifying Awards are presented by the Academic Women’s Caucus, which was founded in its current form in 1975. Its initial charge was ” …to develop an inclusive organization of all women faculty members of the Ann Arbor, Dearborn, and Flint campuses of the University of Michigan which will serve as a forum for the exchange of information about the status of faculty women at the University and as a focus for action necessary to the investigation and resolution of their special concerns.” To this end, the Caucus has met regularly during the academic year since 1976. It has responded to the concerns of its members by sponsoring informational and problem-solving sessions of various kinds and has provided support and a mechanism for exchange of ideas and action proposals.

2020 SARAH GODDARD POWER AWARD
Sarah Goddard Power was widely acclaimed as a major contributor to the advancement of higher education, an advocate for affirmative action and human rights, and a champion of freedom for the international press. As a Regent of the University of Michigan for more than 12 years, Sarah Goddard Power worked tirelessly to advance the position of women and minorities in faculty and administrative roles.

Cathleen Connell, Professor, Department of Health Behavior and Health Education, is being honored for her significant achievement in addressing current challenges faced by women through distinguished leadership at the University of Michigan. Dr. Connell began her academic career as an Assistant Professor in the Department of Health Behavior and Health Education in the School of Public Health at the University of Michigan in 1989, and rose through the ranks to become Professor in 2003. She has served in many leadership roles in her tenure at the University, including associate and senior associate dean of academic affairs, department and associate chair, and directorships. “Cathleen brings true kindness, empathy and graciousness to her leadership roles. With her attitudes and actions, she has helped make the Department and School a place where female scholars feel comfortable and can thrive personally and professionally,” said Mary Janevic, Ph.D., MPH, in a nominating letter. “Cathleen embodies the characteristics of an inspired leader. A patient listener, she has an innate ability to motivate teams to institute changes, meet goals, and achieve success,” Angela Beck, Assistant Dean for Student Engagement and Practice, School of Public Health, wrote.

Allison Steiner, Professor, Department of Climate and Space Science and Engineering, has provided breakthrough contributions towards developing a diverse and inclusive workforce both at the University of Michigan and in her own scientific field at a national and international level. She receives the Sarah Goddard Power Award for her tireless advocacy towards the advancement of women in Earth Sciences worldwide, and her leadership role in promoting equality for female faculty in the College of Engineering. Allison co-founded the Earth Science Women’s Network (ESWN), an international peer-mentoring network of women in the Earth Sciences, whose mission is to promote career development, build community, provide opportunities for informal mentoring and support, and facilitate professional collaborations. At the University and within the College of Engineering Steiner plays active leadership roles in a variety of programs and efforts to develop and implement strategies and plans to support diversity, equity and inclusion. She chaired the Dean’s Advisory Committee on Female Faculty, is a member of the CoE ADVANCE Advisory Committee and Co-Chaired last year’s NextProf Committee. “Looking through the list of the last few years Sarah Goddard Power Award winners is inspirational… Prof. Allison Steiner’s significant achievements in contributing to the betterment of current challenges faced by women through her leadership and community building roles clearly place her in the same company,” wrote Mark Moldwin, Arthur F. Thurnau Professor and Professor of Space Sciences and Engineering, in a nominating letter.

Rhetaugh Dumas was an esteemed leader with vision, insight, and wise counsel who had a major impact in the advancement of nursing, healthcare, and academic programs at U-M. Vice Provost Dumas was only the second African-American to hold the position of a Dean at the University of Michigan when she was appointed in 1981, and the first African-American to be named a Dean. She was reappointed Dean of Nursing in 1986 and 1991 to second and third terms. Prior to that appointment, she was the first woman and first nurse to serve as a deputy director of the National Institute of Mental Health. Dumas was Deputy Director, Alcohol, Drug Abuse, and Mental Health Administration (1979-1981) and before that Chief, Psychiatric Nursing Education Branch of the Division of Manpower and Training Programs (1972-1976). She was also a founding member, a Charter Fellow, and a former president of the American Academy of Nursing. Dumas served the University of Michigan for over 20 years with vision and a commitment to excellence.

2020 Rhetaugh G. Dumas Progress in Diversifying Award Recipient:
The U-M Women’s Studies Department has been selected for the Rhetaugh Dumas Award for its continued commitment to hiring and promoting a diverse faculty. In the fall of 2019, 50% of Women’s Studies faculty were black and/or people of color. Over the past five years, leadership in Women’s Studies has embodied and practiced an “institutional commitment to change.” Two recent department chairs ­- Elizabeth Cole and Rosie Ceballo, African American and Latinx, respectively – during those five years have moved on to Assistant, Associate, and interim dean positions at the College of LSA. Beyond their own leadership positions, they also made the effort to hire black women and/or women of color.
Women's Studies
Lane Hall
204 S. State St.
Ann Arbor, MI 48109-1290
wsdoffice@umich.edu
734.615.6613
734.647.4943
Sitemap
Facebook Instagram