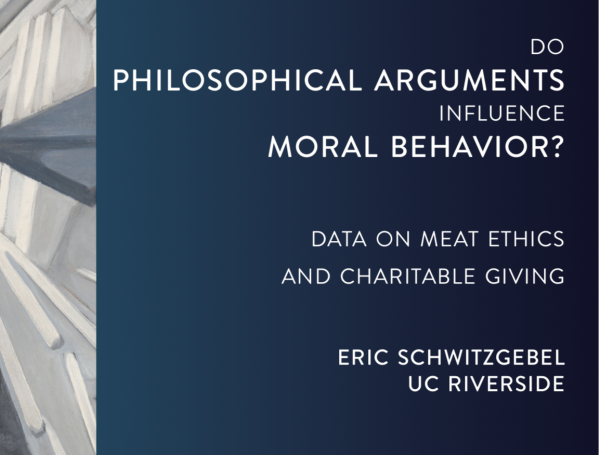 Do philosophical arguments influence real-world moral behavior? In this talk:
(1.) I review my empirical findings on the not-especially-ethical behavior of ethics professors.
(2.) I present new data from a study in which students read a philosophy article defending vegetarianism and discussed the material in groups for 50 minutes. Compared to a control group, students who read and discussed the article were more likely to say eating factory-farmed meat was unethical. We then obtained meal card purchase receipts from campus dining services, which confirmed that students actually purchased less meat after the reading and discussion.
(3.) I present new data from two studies in which MTurk workers were exposed to various arguments for charitable giving, then given a surprise bonus and an option to donate some portion of that bonus to charity. Donation rates were no higher than in the control condition. However, workers who read an emotionally moving narrative did donate at higher rates than in the control condition.
Weinberg Institute for Cognitive Science
9th Floor Weiser Hall
500 Church Street
Ann Arbor, MI 48109-1045
Weinberg-Institute@umich.edu
734.615.3275
Sitemap
Facebook Twitter Youtube