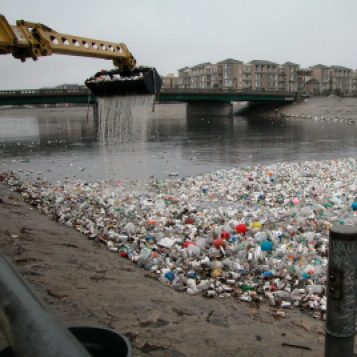 Madisyn Guza is concerned about plastic in our waterways. In this episode she interviews a researcher in the Duhaime Environmental Viral Ecology lab about how she has encountered plastics in the Great Lakes in her research.

(Interviewer- Madisyn Guza) Alright, welcome. Hello, this is Madisyn Guza, thank you for listening today. The environmental topic for tonight is in regards to plastic in the oceans, which I think is a bigger concern than most people will allow themselves to believe. I have an assistant professor here with me today, Rachel Cable, who has done research out in the Great Lakes and in some of the oceans. Hopefully she provokes some thought about some things maybe you didn't think about before. She's going to tell us a little bit about what she has found and what she does.

(Interviewee- Rachel Cable) What we are currently working on is basically the microbial aspect of what's growing on these tiny pieces of plastic because it's well known that on large pieces of plastic you can get stuff that attaches to things like barnacles and stuff like that. Well you'll get on a really large piece of plastic and if that piece of plastic is transported from one place to another, it could possibly be transporting, you know, animals that wouldn't be in one place to another place, right.

(Rachel Cable) Yeah, exactly. Um, so we are kind of looking at the same thing with the microbes on the plastic. Like, can you take a piece of plastic that has gone through a wastewater treatment plant and has certain things on it, will that transplant it to another place and like bring microbes there.

(Rachel Cable) Whether or not those could be a factor for moving those bacteria around, um, is a question. Part of our lab is working on bacteria fasces in the environment, um, which are viruses that very specifically attack bacteria, so we will also look at in the Great Lakes, harmful algal blooms, the viruses that attack the siona bacteria in the microcystis, um, in Lake Erie. Um, we look at the viruses that attack bacteria in the water in the Antarctic, um, also in the North Atlantic, all over the place.

(Rachel Cable) I was actually very surprised that we found plastic everywhere we sampled in the Great Lakes, um, we were expecting to see, um, perhaps some sort of concentration of plastic like we see in the Atlantic and in the Great Pacific Garbage Patch as we were talking about. How that kind of like pulls things in that are floating at the surface, and we were thinking that we were going to see that in the Great Lakes, but, um, basically we just found plastic everywhere. Um, there were higher concentrations in some places than others, but that was probably the most surprising thing to me. That it is omnipresent. It's hard to go anywhere in the water without finding plastic, but yet it is so easy for us to just say 'oh it's just plastic' because we don't see the down end of anything. The biggest concern for me is that there is no slowing of the production of plastic or the use of plastic, so um, in the plastic that we saw, it isn't going to be going away. We don't actually know what the effects of these plastics are or the toxins that they may or may not carry on like the organisms that are in the water, as well as us, obstruction of like having these things that don't even break down when they sediment into the actual benthos, the bottom of the lake and then if they get disturbed up again is there going to be fluctuations in the microbes that do prefer plastics? Are there going to be fluctuations in the toxins that are associated with them? Um, and just the fact that it is going to become more and more of an issue, it's not going to de escalate at any point because we are not stopping putting plastics into the environment.

(Rachel Cable) Um, people are very concentrated on trying to take out what is there, whereas I kind of, what we think is like let's stop, you know, putting it in, um, and like maybe monitor what is there, perhaps or something like that, but and like being able to take it out, we've known because we've tried to actually count what's there.. It took us a year and a half just to process, um, the samples that we got in the first place.

(Rachel Cable) There's a lot of uses for plastic that are, um, completely indispensable, you can't really change biomedical uses and sort of have limited mobility. Glass straws and metal straws are kind of a danger and so plastic is like kind of one of the only options. I think for awhile with BPAs, um, that were leaching into peoples' bodies, um, people could tell that there like endocrine effects of having these chemicals in your body, and not only does it affect you, it affects the next generation. One of my professors was one of the leading researchers on BPAs and by like two years from then--no BPAs in like any consumable plastic.

(Madisyn Guza) So it's doable, it's totally doable if there's a good enough push for it to happen.

(Rachel Cable) Exactly, and if people feel like they are being affected themselves.

(Madisyn Guza) Hopefully you can take away some useful knowledge and take away some concepts like viruses and how it affects not only animal health but also human health and what that means for our future.