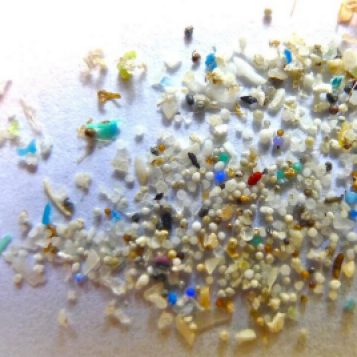 What are microplastics, where do they come from, and how can we research their presence in our oceans, lakes and rivers? In this episode Engineering student Brianna Roest interviews Dr. Paul Steen, an ecologist with the Huron River Watershed Council.

Brianna:   Hello, my name is Brianna Roest and today we’re going to be discussing the emerging issues surrounding microplastics. Microplastics were first discovered in the 1970s and are small pieces of plastic, less than five millimeters in diameter, that break down from larger plastic waste. They are currently found in all regions of the Earth and there has yet to be any concrete answer about the potential harm that microplastics could cause. I am joined with watershed ecologist Paul Steen to talk more on this developing concern.

Paul:        So uh my name is Dr. Paul Steen. I work with the Huron River Watershed Council based in Ann Arbor, Michigan. My experience with microplastics is I started looking at the topic about two years ago after we were alerted by a paper from the United States Geological Survey that said the Huron River was full of microplastics. So up til’ then we hadn’t known that it was a problem in our system, so we started looking at it more closely, reading about it, and sampling for it.

Brianna:  And how did you go about sampling for the microplastics?

Paul:        Well it was a long process. Um to figure out how to do it. It’s a very new science I suppose you could say. Through some practice we decided we were going to put a thousand gallons of water, of river water, through this, through this really fine net. The thousand of gallons just keep on pushing and pushing and pushing over the course of several minutes, and all the debri that was floating in the river collects in a small PVC sampling device on the back end of the net. Once your sampling is done you unscrew that PVC pipe, and you put it through a series of sivs to make sure that we’re getting rid of all the big stuff that wouldn’t be considered micro. And then you end up with a whole bunch of junk that you have to sort through and try to figure out whats plastic, and what’s sand, and what’s plants and muck because there are lots of stuff in the samples.

Brianna:  Since microplastics are so micro--small, how do we know that they can have an effect on organisms at all?

Paul:       Mmhm...I have to say we don’t know, but it makes logical sense that it would. So some possible things that plastic could do is fill up the stomachs of fish and insects so that there isn’t room for their food and they could potentially starve, ya know,  if they can’t get rid of the plastic once it’s in their body, and another thing plastics can do is possibly release different chemicals that could affect hormones and the endocrine system. So it certainly seems logical that it could have a real effect, but whether it really does or not is in question.

Brianna:  And would filtering it[microplastics] out like in the wastewater treatment plant, would that account at all for the plastics that are getting into the fish that we eat?

Paul:       Yeah it would help. It’s thought that our wastewater treatment facilities are a major source because a lot of the microplastics are coming from our laundry machines, like from polar fleece. Which then releases ya know then goes to the wastewater treatment plant process, ya know settles and then they process it but still a lot of it comes out. So if you could stop it at the wastewater treatment plant, that would help a lot. One thing that the watershed council has been doing this past year has been giving out for free these little balls called “core balls”. They’re about the size of a softball and they have all these ridges and hooks and the purpose of those is that you throw them into your laundry machine and it catches the microplastics. We’re trying to provide those to people so they can use them and we can figure out if they work and then this is kinda like a test if we know that they’re effective then we can then ya know market them more and get more people to use them. And that could be a good way for your average person just doing their laundry to contribute to stopping the problem. That’s where we’ll see the biggest differences is locating the problems and just convincing people that they need to do something about it.

Brianna:  A big thanks for Paul Steen for being on the show and giving us some insight into how people are approaching this new ecological issue. When working with new possibly dangerous environmental issues it can be hard to know what the effects will be or to what extent they will affect the Earth. It’s because of the hard work of both local and national researchers that we are able to learn more about microplastics and other environmental issues. I encourage everyone to stay updated on this issue as more research is being done into the effects of microplastics. Thanks for listening.