Food Waste at the University of Michigan 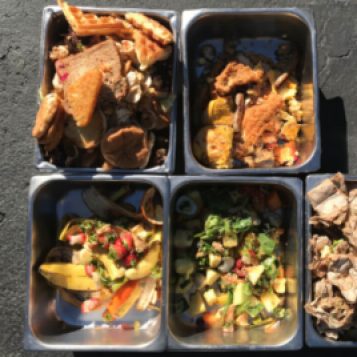 Each day thousands of students make their way through the U-M dining halls, and each day a significant amount of the food prepared is wasted. This podcast explores what Michigan Dining is doing to reduce food waste and also the role that students can play in addressing this problem.

Hello, and good morning. My name is Henry Pochini.

Henry: Hi, so at which dining hall do you work at?

Olivia: I work at Twigs Dining Hall at Oxford.

Henry: Ok, and how much food do you notice that gets wasted there?

Olivia: I notice it mostly in the evening or when were switching between different meals in the day. So after breakfast we’ll pull the breakfast food eventually and then compost it and then at the end of they day at dinner we’ll pull all the food that doesn’t get eaten and pretty much compost everything.

Henry: Are there like certain kinds of food that you notice gets wasted more than others?

Olivia: Oh my gosh chocolate chip cookies get wasted so much. We make um between four and eitht trays of cookies a day at the dining hall and I would say at least one of those trays probably doesn’t get eaten every single day so it’s really sad having to throw the cookies away. Um, most produce I would say gets eaten but sometimes if there’s things that get made up like at the hot food bar at dinner that are left over from dinner and we can’t save them for the next day then those get composted too.

Henry: Ok, and what efforts are made by the dining hall to try and reduce the waste that is created.

Olivia: We keep careful track of how many portions are left every night. So last year I think this was really helpful because it helps prepare us to know how much to make this year um and trying to make us close to what we think we’ll need I would say is the main thing that we do to try and combat having excess food. But obviously you don’t want to have too little because otherwise people run out of food and then they get hungry and sad that what they want to eat isn’t there anymore um so keeping careful track of what gets wasted every night so that next year we can do better, or next time we serve that food we can do better.

Henry: Ok, and what can we as consumers do to try and limit the waste?

Olivia: I mean definitely eating every thing you put on your plate is certainly helpful. If you ever are hungry at night and you want to come to Twigs late night and grab a bagel that’s left over or something that prevents it from going into the compost, grab some cookies, bring them back, no one is going to be mad at you if you bring a couple of cookies out. I think we’ll just be happy that they’re not going into the compost bin.

Michigan dining has also made many efforts to reduce their waste. One strategy that has been implemented, is reducing the size of the plates that the food is being served on. Many times, plates are displayed with the food already on it, with a precise amount of food given, designed to make the consumer be able to eat all of it, without wanting to get more, thus reducing the amount that gets thrown away. They have also implemented trayless dining, which also helps reduce waste. All pre consumer waste that is created from the kitchens is sent to the ann arbor compost center where it is then turned into compost mulch and topsoil. All post consumer waste is also composted through the university’s own compost facilities, and at some dining halls, is processed through a pulper to extract the water from the food.

In the university’s efforts to make dining halls more sustainable, 17.73% of it’s food is purchased from local or sustainable sources, with a goal of reaching 20% by 2025.

In the end, however, the University can only do so much to reduce waste. But their efforts are futile, if we as consumers do not do what we can to make sure that all food gets put to good use. That means being conscious of the amount of food we are taking, and to not have the mindset that throwing away food isn’t a big deal. I’m Henry Pochini.