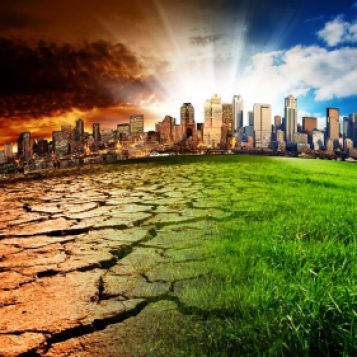 SLE first year student Javier Contreras sits down with a professor who has been teaching about climate change for more than a decade. Hear what Astronomy Professor Edwin Bergin has to say about how climate change works, how attitudes about climate have shifted, where we are headed and why.

Voiceover: For this episode, we have professor Edwin Bergin of the University’s Astronomy department to talk about climate change and science communication. We sat down and had a conversation, and I started off by asking him whether or not he feels frustrated with all the doubt that is cast upon Scientists with topics such as climate change.

Professor: Right, so it’s incredibly frustrating, I should take a step back and say the positive part is from my interaction with students in the classrooms, I’ve been teaching climate change for over a decade now. And I always start by asking the students ‘Do you think Climate Change is real?’ and ‘Do you think we should do something about it?’, so it’s not two questions, its two questions in one and the positive responses to the question have increased significantly over the years. So its clear that the younger generation is empowered about this, so that is a positive statement. So where is the negative? well, the negative is that this is just what the planet does. The planet is warmer than it should be because it has carbon dioxide and water in the atmosphere. If it didn’t have it it would be a frozen iceball in space. So we need it, we just don’t need too much of it, so if you put more CO2 in the atmosphere the planet will get hotter, and it is very simple. And it's frustrating, and it has to do with money and the way society is structured, the way our lives are structured right now.

Voiceover: Next, we talked about why science communication nowadays is so difficult, and if scientific literature was getting possibly too complicated

Professor: I think its something a little different, its the devaluing of scientific expertise because the availability of opinion cast in the lieu of expertise, so if you go on Twitter anyone can express an opinion or Fox News or some organization could bring on someone online  and interview them as an expert on something when they may not have the credentials to do that. Fox News is not the only one, I don’t want to single them out, other news organizations bear some of the blame here. But mostly I actually blame Facebook, Twitter, Google, where you have the devaluing of people who spent their lives learning about something when someone on a corner can outweigh that expertise with a tweet.

Voiceover: I then asked him if he and his fellow scientists get tired of trying to break through to the public and make everyone understand.

Professor: Well it’s a little different, I’m an astronomer when I go out and interact with the public generally I talk about things within that realm every once in a while I will talk to someone about climate change and I will try to explain what’s going on and so my main impact is in the classroom right now with the students. However, I will say that no, I am not tired, it's for the good of the planet. We have to do this, we have to change the way we live. I’m just as bad as everyone else, I got an SUV, I got to sell that. I have to change the way I live, we all have to start embracing solar panels, even living in Michigan. Find a way to change the way the grid is structured. Somehow we need to find a way to set up battery stations for cars across the country and change the way we live. It's going to be hard hard hard, and the problem is that it intersects, the way we live is structured around companies that are making a lot of money and may lose, and sadly our political system is aligned, often, with moneyed interest because of the way its structured, and so that also is a problem as well.

Voiceover: Overall, I was able to learn many things throughout my time with the professor, and I hope you did too. Most of the conversation had to be cut out due to time constraints, but I hope you still found it enjoyable and informative. Don’t forget to  tune in next week for our next episode.
And so, in the end, I asked him if he thought that we were past the point of no return, and he responded with a rather disheartening answer.

Professor: We are, I suspect, based upon the most recent reports from the experts, who I trust, that we are likely past the point, to where we are not going to have severe changes to the weather on the planet. And this will mean flooding in Florida, New York, all the coastal areas, and we will have to adapt.