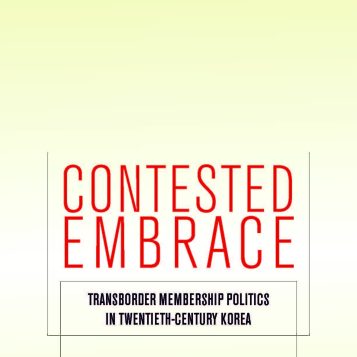 Description from Publisher: Scholars have long examined the relationship between nation-states and their "internal others," such as immigrants and ethno-racial minorities. Contested Embrace shifts the analytic focus to explore how a state relates to people it views as "external members" such as emigrants and diasporas. Specifically, Jaeeun Kim analyzes disputes over the belonging of Koreans in Japan and China, focusing on their contested relationship with the colonial and postcolonial states in the Korean peninsula.

Extending the constructivist approach to nationalisms and the culturalist view of the modern state to a transnational context, Contested Embrace illuminates the political and bureaucratic construction of ethno-national populations beyond the territorial boundary of the state. Through a comparative analysis of transborder membership politics in the colonial, Cold War, and post-Cold War periods, the book shows how the configuration of geopolitics, bureaucratic techniques, and actors' agency shapes the making, unmaking, and remaking of transborder ties. Kim demonstrates that being a "homeland" state or a member of the "transborder nation" is a precarious, arduous, and revocable political achievement.