Sociology and Empire: The Imperial Entanglements of a Discipline 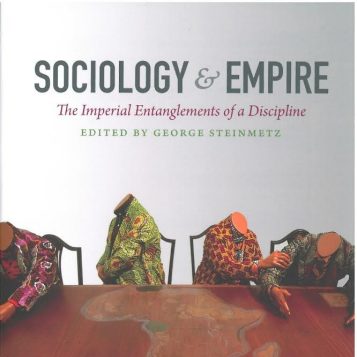 Description from Publisher:  The revelation that the U.S. Department of Defense had hired anthropologists for its Human Terrain System project—assisting its operations in Afghanistan and Iraq—caused an uproar that has obscured the participation of sociologists in similar Pentagon-funded projects. As the contributors to Sociology and Empire show, such affiliations are not new. Sociologists have been active as advisers, theorists, and analysts of Western imperialism for more than a century.

The collection has a threefold agenda: to trace an intellectual history of sociology as it pertains to empire; to offer empirical studies based around colonies and empires, both past and present; and to provide a theoretical basis for future sociological analyses that may take empire more fully into account. In the 1940s, the British Colonial Office began employing sociologists in its African colonies. In Nazi Germany, sociologists played a leading role in organizing the occupation of Eastern Europe. In the United States, sociology contributed to modernization theory, which served as an informal blueprint for the postwar American empire. This comprehensive anthology critiques sociology's disciplinary engagement with colonialism in varied settings while also highlighting the lasting contributions that sociologists have made to the theory and history of imperialism.