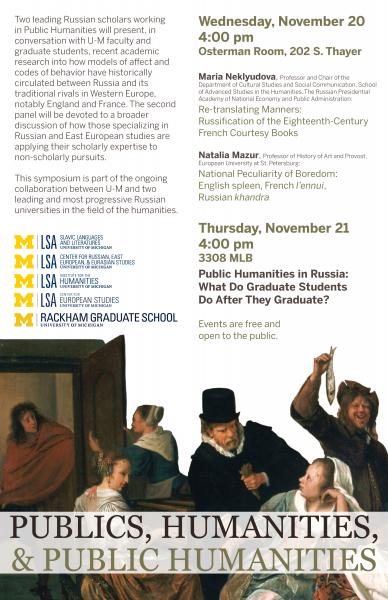 Maria Neklyudova is Professor and Chair of the Department of Cultural Studies and Social Communication, School of Advanced Studies in the Humanities, The Russian Presidential Academy of National Economy and Public Administration (RANEPA):

Books on good manners and proper etiquette easily travel through time and space and during the last decades managed to adapt to digital reality much better than other types of writing. Although the origins of this phenomenon can be traced to the Renaissance (and beyond), the real flourishing of courtesy treatises started in the 18th century, partially due to the spread of French language and manners throughout European courts. Their sheer number is staggering, yet we still know very little not only about their audience but also about their authors or compilers. With some notable exceptions, such as Baldassare Castiglione’s Il Cortegiano and Baltasar Gracián’s Oráculo, even less attention is paid to their translations. But if we take much less famous treatises, the fact is that most of them were translated at least into one – and more often into several – European languages. For example, many books of Abbé de Bellegarde, a prolific distributor of advice, were rendered into English, German, Portuguese, Polish and Russian. When we compare these translations with the originals (the “originality” of the originals is another problem to be dealt with), it becomes obvious that not all advice was “translatable” either because of political implications or because of linguistic difficulties (the absence of relevant vocabulary in the target language). This paper is part of a research project that attempts to trace the network of translations of the 17th and the 18th century’s courtesy books. It will focus on English and Russian translations of Jacques de Callières’ and Abbé de Bellegarde’s treatises.

Natalia Mazur is Professor of History of Art and Provost, European University at St. Petersburg:

In the eighteenth and early nineteenth centuries, many European philosophers, theologians, physicians and writers agreed that boredom was the main malady of their time. However, the nature and the causes of boredom were explained differently in different countries. The English considered spleen, or the “English malady,” a serious disease often leading to suicide: people afflicted by spleen looked for medical help. The French saw the roots of l’ennui in human psychology or in the structure of the society: one could escape l’ennui through religion or revolution. The protagonists of the best Russian novels – from Pushkin's Eugene Onegin to Goncharov's Ilya Oblomov – were looking for a remedy against boredom. What has happened to boredom in the last two centuries, what do we call it today, and how can the history of emotions help us escape it?
Slavic Languages and Literatures
812 East Washington
3040 MLB
Ann Arbor, Michigan 48109
slavic@umich.edu
734.764.5355
734.647.2127
Sitemap
Facebook Twitter Youtube