Saint-Domingue by Way of Saint-Petersburg: Imagining the Haitian Revolution in Imperial Russia 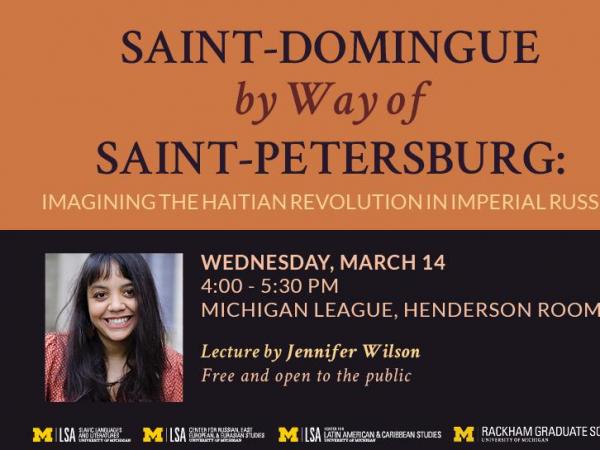 This talk will explore how the Haitian Revolution was covered in the Russian press from 1802-1804. Of primary focus will be how the presence of Polish forces in Haiti (who were sent by Napoleon to put down the slave rebellion ostensibly in exchange for the repatriation of Polish territory from Russia) contributed to Russia’s favorable coverage of the Black insurgency. Special attention will also be paid to how the then emerging discourse of romantic nationalism was used to portray Russia's imperial practices in neighboring Slavic territories (like Poland) as somehow physiologically distinct from the French colonial presence in the West Indies.

Dr. Jennifer Wilson is a Postdoctoral Fellow in the Department of Russian and East European Studies at the University of Pennsylvania. While at Penn, she is working on two manuscripts: Radical Chastity: Abstinence and the Political Imagination in 19th Century Russian Literature and Writing the Black Atlantic in Imperial Russia. She has also contributed articles on topics related to Russian literary culture and politics to The New Yorker, The New York Times, The Paris Review, The Guardian, and elsewhere.
Slavic Languages and Literatures
812 East Washington
3040 MLB
Ann Arbor, Michigan 48109
slavic@umich.edu
734.764.5355
734.647.2127
Sitemap
Facebook Twitter Youtube