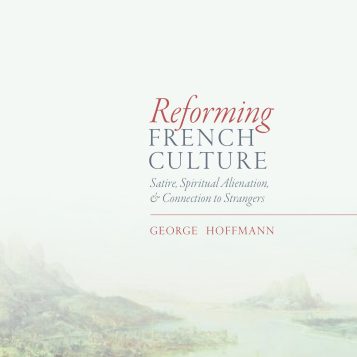 Reforming French Culture’s explicit subject is the literary genre of Reformation satire--colloquial, obscene, scatological--designed to mock the excesses as well as the essence of the Roman Catholic rite and hierarchy. It proposes that while romance, with its episodic, heroic narrative, is the literary genre of Counter‐Reformation, satire is the genre of Reformation. This minor category of Renaissance French literature constitues an “unstudied continent,” as Hoffmann describes it, that plays a key role not only in French literature, but also in French history, and in the evolution of Frenchness more generally. And so from this deceptively small focus, huge vistas open up: on the Reformation, on French history, and on the symbiosis of spirituality and estrangement to which modern French culture is heir. Rather than using literature to illustrate history, or contextualizing literature through historical background, this book brings literary understanding (what satire is and what it does) to bear on historical understanding. Situated at the crossroads of religion, literature and cultural history, this book gets at the question of how France in this period became a culturally Protestant country while remaining confessionally Catholic.