Roberto Esposito’s The Origins of the Political. Hannah Arendt or Simone Weil? 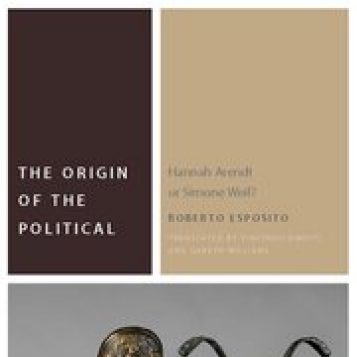 In this book Roberto Esposito explores the conceptual trajectories of two of the twentieth century's most vital thinkers of the political: Hannah Arendt and Simone Weil. Taking Homer's Iliad--that "great prism through which every gesture has the possibility of becoming public, precisely by being observed by others"--as the common origin and point of departure for our understanding of Western philosophical and political traditions, Esposito examines the foundational relation between war and the political.

Drawing actively and extensively on Arendt's and Weil's voluminous writings, but also sparring with thinkers from Marx to Heidegger, The Origin of the Political traverses the relation between polemos and polis, between Greece, Rome, God, force, technicity, evil, and the extension of the Christian imperial tradition, while at the same time delineating the conceptual and hermeneutic ground for the development of Esposito's notion and practice of "the impolitical."

In Esposito's account Arendt and Weil emerge "in the inverse of the other's thought, in the shadow of the other's light," to "think what the thought of the other excludes not as something that is foreign, but rather as something that appears unthinkable and, for that very reason, remains to be thought." Moving slowly toward their conceptualizations of love and heroism, Esposito unravels the West's illusory metaphysical dream of peace, obliging us to reevaluate ceaselessly what it means to be responsible in the wake of past and contemporary forms of war.