“You need to have an immersion experience. The winter is cold here anyway,” he said. “It will change your life. It really opened my eyes.”
by Carissa Van Heest 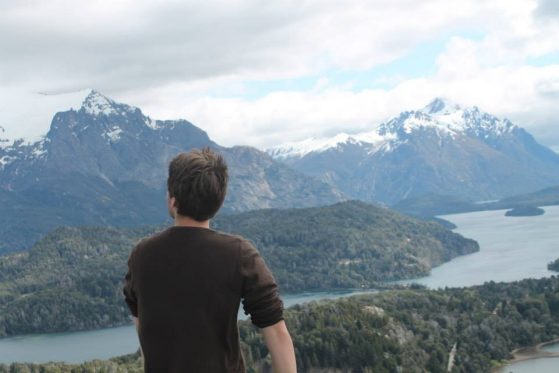 LSA senior Micah Warschausky, double majoring in Spanish and International Studies, actively seeks out ways to enhance and apply his learning.  In Fall 2013, he studied abroad in Argentina through U-M’s Center for Global and Intercultural Study’s Buenos Aires program.  This was his third time studying abroad, as while in high school, he studied in Guanajuato, Mexico and Málaga, Spain.

“Once I went abroad, I got to immerse myself.  It was rewarding to be able to speak another language and one I can use in the US since there is such a large Spanish-speaking population,” Warschausky remarked.

He enrolled in five courses, two directly at Argentinian universities (neuropsychology and marketing) and three at a center with American students, taught by Argentinian faculty.

Warschausky highlighted the role that the Spanish 295: Introduction to Hispanic Literatures course he took at U-M played in his academic success in Argentina. “It definitely prepared me for the heavy reading components of my courses,” he said.  “The skills and comprehension transferred over.”

In the five months he spent in Argentina, he explored various parts of the country, including the Patagonian region.  “We hiked, we took a tram up a mountain,” he said.  “It is the most beautiful place in the world.  There are breathtaking views.  It was just really peaceful.  The natural beauty was astounding.”

While in Patagonia, Warschausky and fellow U-M students also visited a primary school with limited resources in the city of Bariloche.  The U-M group was featured in an article in a local newspaper, which included a photograph of Warschausky interacting with a map of Michigan.

He also toured a vineyard in the Mendoza area and traveled to Córdoba with some friends.  “I had so much freedom,” he remarked.  “I developed a really close group of friends I still keep in touch with and I can’t wait to go back.”

For students considering studying abroad, Warschausky enthusiastically encourages them to do so.  “You need to have an immersion experience.  The winter is cold here anyway,” he said.  “It will change your life.  It really opened my eyes.”

Upon his return to Ann Arbor, Warschausky is now in his third year volunteering with the Proyecto Avance, Latino Mentoring Association (PALMA) organization.  He said his recent U-M Spanish linguistics courses have positively impacted his volunteer work. “It is really helpful in my interactions with my PALMA students,” he said.  “When teaching English I can use concepts from Spanish linguistics.”

After his upcoming graduation, Warschausky said he envisions working in Spain or Argentina for several years, then returning to the US to pursue an MBA degree.  He is interested in becoming a venture capitalist.  “I would really like to fund promising start-ups,” he noted.

Warschausky also plans to continue traveling the globe.  “The world is huge.  Ann Arbor is just a little dot on the map,” he remarked. “I have a lot more traveling to do.  I’ve got the bug.”