“I was their only English translator. I would relay information between English-speaking tourists and my Portuguese-speaking co-workers,” she remarked. “The fact I already had Portuguese knowledge was a big deal to the people I was working with.”
by Carissa Van Heest 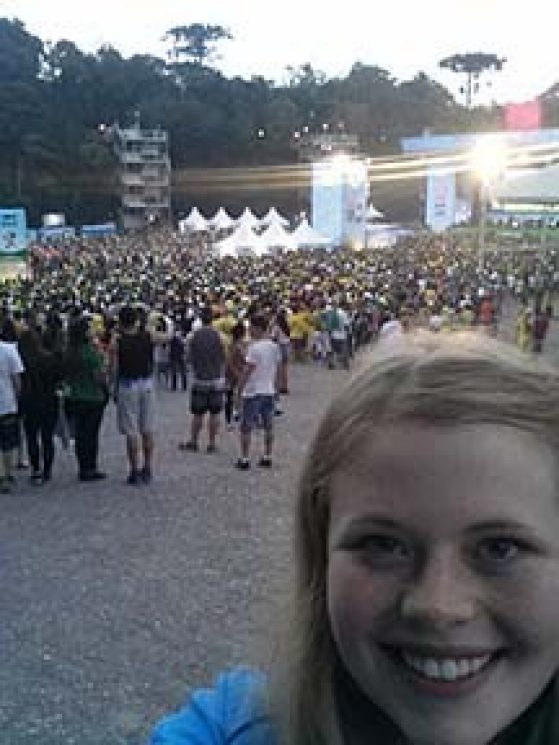 While soccer fans worldwide followed the 2014 World Cup tournament, student of Portuguese Ellyn Marmaduke had the opportunity to volunteer at the event.  Marmaduke traveled to Brazil this past summer to teach English classes and while there, was delighted to be selected for a volunteer position with the event.  She was part of a team of Town Hall volunteers in the Brazilian city of Curitibá where four World Cup soccer matches were held.

Marmaduke held a variety of responsibilities within the FIFA Fan Fest celebrations located directly outside of the stadium.  At Fan Fest, fans could watch the matches together on large screens in a festive setting.  Marmaduke’s duties centered around communication, including translation, giving directions, providing information about the area, and distributing tickets for the Fan Fest events.

“I was their only English translator.  I would relay information between English-speaking tourists and my Portuguese-speaking co-workers,” she remarked.  “The fact I already had Portuguese knowledge was a big deal to the people I was working with.”

Marmaduke began her Portuguese studies in the Department of Romance Languages and Literatures with Portuguese 101, in January, 2013.  She said the Portuguese courses she has taken with Prof. Niedja Fedrigo and Prof. Fernando Arenas helped her tremendously when she was in Brazil.

“Classes helped me to practice the language and hear it every day,” she noted.  “The constant practice of listening and speaking in the classes prepared me to just naturally flow into conversation when I was there.”

This was Marmaduke’s third trip to Brazil, but her first with a background in Portuguese.  “I was able to successfully maneuver around the city without the support of other English speakers,” she remarked.  “It shocked me how much Portuguese I already knew.  I gained a lot of confidence in myself.”

Marmaduke, a senior pursuing a B.A. in Art and Design, also is completing an International Studies minor with a focus on human rights in international relations.  She said her FIFA Fan Fest training included some training in this area.

“Part of my training for the World Cup was how to look for signs of domestic violence and sexual slavery.  In the future, I’d love to work with human rights regarding favelas and domestic life in and around the city,” she said.

After graduation, Marmaduke plans to return to Brazil and is interested in working at the 2016 Olympic Games in Rio de Janeiro.   She noted, “Even if I volunteer, I will be a part of it.  Absolutely.”  After that, she plans to pursue a graduate degree in the areas of international relations and human rights.

For U-M students considering studying Portuguese, Marmaduke strongly encourages them to do so.  “There’s such a growing opportunity,” she said.