“I get to see them go from zero to sixty. By the end of the semester, they are building websites and games,” he said. “It is really rewarding seeing them progress and helping them out along the way.” 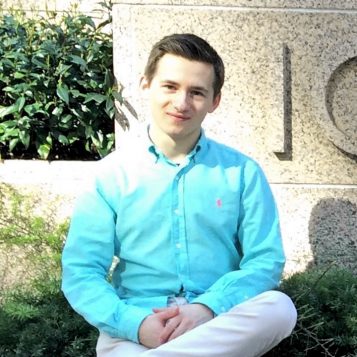 Maxim Aleksa, a second-year student double-majoring in Romance Languages and Literatures (RLL) and Computer Science, grew up speaking Russian and Italian, and studied French and Spanish, as well as some German and Latin, prior to attending U-M.

Within his RLL major, Maxim is continuing his study of Spanish and French, and his computer science major includes programming language coursework.  He said he sees parallels across his two majors.  “I think the learning process is very similar.  You spend lots of time practicing.  Both skills require you to think in a different way,” he said.

Maxim seeks out ways to share his knowledge and use his skills to help others.   He serves on the Italianissimo club’s board as the Online Communications Director.  In this role, he maintains the Italianissimo website, posts to the club’s Facebook account, and creates posters advertising club events.

“I worked on his project on Eastern Andalusian vowels, comparing speakers from different parts of Spain,” Maxim said.

Currently, he is a Teaching Assistant for EECS 183:  Elementary Programming Concepts, an introductory Computer Science course.

“I get to teach a discussion section once a week and hold office hours,” he noted.

Maxim said he enjoys teaching his students.  “I get to see them go from zero to sixty.  By the end of the semester, they are building websites and games,” he said.  “It is really rewarding seeing them progress and helping them out along the way.”

Maxim utilizes his computer programming background to build websites, including the EECS 183 website.

“What I like best about [building websites] is that you can create something and everyone can see it,” he said.  It is very easy to share.  You can make something useful very easily.”

Maxim also enjoys being a student.  One of his favorite RLL courses is the Don Quixote seminar, taught by Prof. Enrique García Santo-Tomás.  “It challenged me in a way that no other course did, especially in my first year,” he said.

He participated in U-M’s Arts in Paris study abroad program last summer.  “It was fantastic.  Probably one of the best choices I made in college,” he remarked.  “We went to museums and castles and different places in Paris.  That was really unique.  We didn’t meet in a classroom.”

Maxim sees both of his majors playing a significant role in his future career in the area of computational linguistics. “I want to combine my interests in computer science and languages,” he noted.  He is interested in using artificial intelligence and natural language processing to create software that works with spoken language.