“It is a pretty unique program,” Frederick commented about the RLL major, which allows students to study two Romance languages and cultures while making connections between the two. “This is exactly what I’m looking for,” he remarked.
by Carissa Van Heest 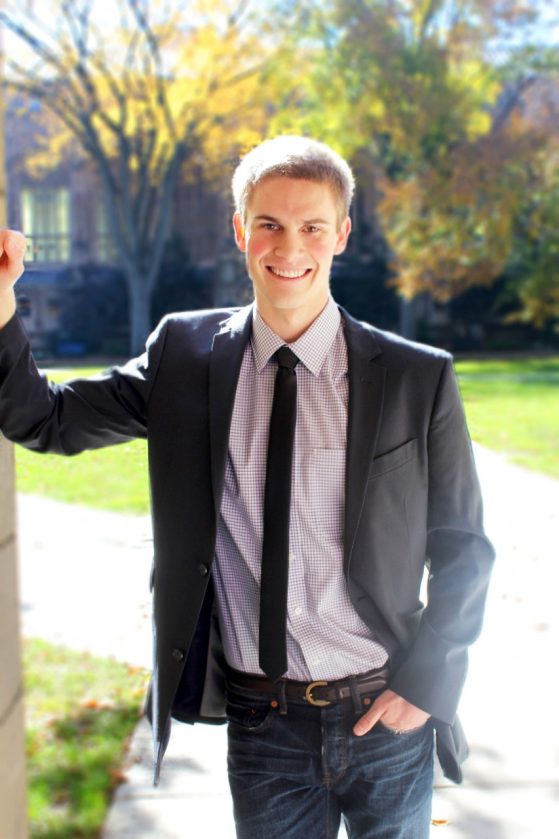 Romance Languages & Literatures (RLL) honors major Bryan Frederick remembers exactly how he felt when he first heard about the existence of the RLL major, as a freshman.  “It was the most clear moment of my life,” he recalls, realizing he would have the opportunity to pursue his interests in French and Spanish within a single major.

“It is a pretty unique program,” Frederick commented about the RLL major, which allows students to study two Romance languages and cultures while making connections between the two.  “This is exactly what I’m looking for,” he remarked.

Now a senior, Frederick is completing an RLL honors thesis, an extension of the research he’s been conducting over the past three years with Spanish Linguistics faculty members Prof. Nicholas Henriksen and Prof. Lorenzo Garcia-Amaya through U-M’s Undergraduate Research Opportunity Program.

“My thesis looks at how students develop pronunciation in their second language while abroad versus at home,” Frederick described.  “We're then extrapolating from this data to see if it can be used as a fluency measure, or as a method of determining which program (abroad or at home) resulted in the greatest language proficiency improvements.”

“It’s extremely interesting,” Frederick commented about his thesis research.  “I’m really excited to see what the final thesis shows.  I’m hoping to be able to publish it.”

In addition to his RLL honors major, Frederick is completing academic minors in Biochemistry and Community Action and Social Change .  He also founded a U-M student organization, the Culture of Medicine Club, inspired by a Medical French (274) course he took with Prof. Sabine Gabaron.  The organization explores the intersection of healthcare and culture through a speaker series, volunteer events, and weekly meetings.

Frederick also volunteers at a local high school, teaching students who are learning English as a second language.  In addition, he volunteers at Freedom House in Detroit, working with asylum-seekers.  He said that he frequently has the opportunity to use his French and Spanish language skills in his volunteer work.

Frederick noted that his volunteer work has significantly shaped his career goals.  “Now that I’ve had these experiences, and worked with kids from very complex social contexts, it has made that gray area very clear to me,” he remarked.  “There’s potential for my major to work its way into my career.”

After his upcoming U-M graduation, Frederick plans to pursue a Master’s degree in Social Work before attending medical school to become a child psychiatrist.  “I want to work with asylum-seekers to offer psychiatric services,” he said.   “Wherever I’m at, I want to come back to Detroit to work with children from non-native-English speaking backgrounds.  I think the educational plan I’ve chosen will definitely make that career the best option for me.”

Frederick said he values his learning both inside and outside the classroom.  “It was important to me not only to get a good education at U-M but to have good experiences,” he remarked.  “Those experiences helped me mature and develop a career goal.  I wouldn’t give up anything I’m doing [to have] an extra hour every night.”