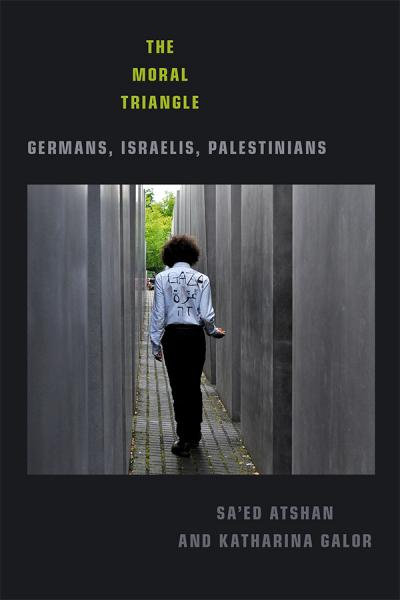 Co-sponsored by the Department of Germanic Languages and Literatures

Berlin is home to Europe’s largest Palestinian diaspora community and one of the world’s largest Israeli diaspora communities. Germany’s guilt about the Nazi Holocaust has led to a public disavowal of anti-Semitism and strong support for the Israeli state. Meanwhile, Palestinians in Berlin report experiencing increasing levels of racism and Islamophobia.

In The Moral Triangle Sa’ed Atshan and Katharina Galor draw on ethnographic fieldwork and interviews with Israelis, Palestinians, and Germans in Berlin to explore these asymmetric relationships in the context of official German policies, public discourse, and the private sphere. They show how these relationships stem from narratives surrounding moral responsibility, the Holocaust, the Israel/Palestine conflict, and Germany’s recent welcoming of Middle Eastern refugees. They also point to spaces for activism and solidarity among Germans, Israelis, and Palestinians in Berlin that can help foster restorative justice and account for multiple forms of trauma. Highlighting their interlocutors’ experiences, memories, and hopes, Atshan and Galor demonstrate the myriad ways in which migration, trauma, and contemporary state politics are inextricably linked.

Sa’ed Atshan is Assistant Professor of Peace and Conflict Studies at Swarthmore College. As an anthropologist and peace and conflict studies scholar, Atshan’s research is focused on contemporary Palestinian society and politics, global LGBTQ social movements, and Quaker Studies and Christian minorities in the Middle East. He is also the author of Queer Palestine and the Empire of Critique (Stanford University Press, 2020).

Katharina Galor is the Hirschfeld Visiting Associate Professor of Judaic Studies and Visiting Associate Professor of Urban Studies at Brown University. Galor worked as a field archaeologist in France and the Levant between 1988 and 2006 with a focus on ethnicity, religious affiliation, and gender. Since 2006, her interests have shifted to encompass cultural heritage studies with a focus on the Israel-Palestine conflict. Publications include The Archaeology of Jerusalem: From the Origins to the Ottomans (2013, with Hanswulf Bloedhorn) and Finding Jerusalem: Archaeology between Science and Ideology (2017).

Katharine Halls is a PhD candidate in History at the CUNY Graduate Center and an award-winning translator of Arabic literature. She is also a co-founder and coordinator of the Jewish-Muslim Research Network.