Background Music vs. Neorealist Music: The Case of THE BICYCLE THIEF

A talk by University Distinguished Faculty and Professor of Italian at MSU, Joseph Francese 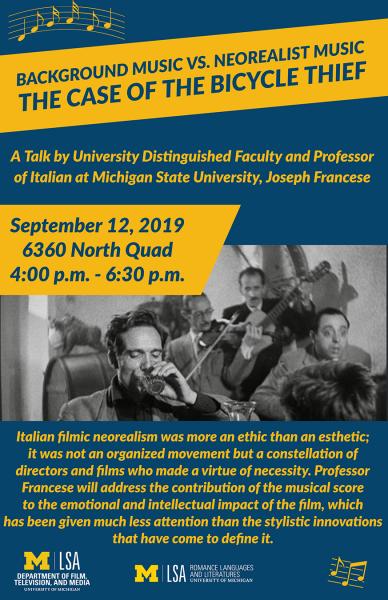 Italian filmic neorealism was more an ethic than an esthetic; it was not an organized movement but a constellation of directors and films who made a virtue of necessity. Nonetheless, in hindsight it has come to be defined by its stylistic innovations (for example, the use of location rather than studio, and of non-professional actors). As a result, the critical bibliography on the topic deals extensively with individual films, the auteurs, and with matters of form and content (the introduction of the perspective of the subaltern classes), the contribution of the musical score to the emotional and intellectual impact of the films has been given much less attention.
The purpose of this paper is that of beginning to address that lacuna.

Joseph Francese is University Distinguished Faculty at Michigan State University, Series Editor of “Studi di italianistica moderna e contemporanea nel mondo anglofono/Studies in Modern and Contemporary Italianistica in the Anglophone World” (a monograph series published by Firenze University Press) and Senior Editor emeritus of ITALIAN CULTURE (2003-2018). He is the author of numerous articles and chapters on topics in Renaissance and contemporary literature and film (including an essay on the influence of Cesare Zavattini on Latin American cinema), and has written monographs on Sciascia, Pasolini, postmodern narrative, Italian cultural politics in the 1950s, and the fictions of Eco, Consolo, and Tabucchi.