Ghostly Labor in the Levantine Prism of Jacqueline Kahanoff 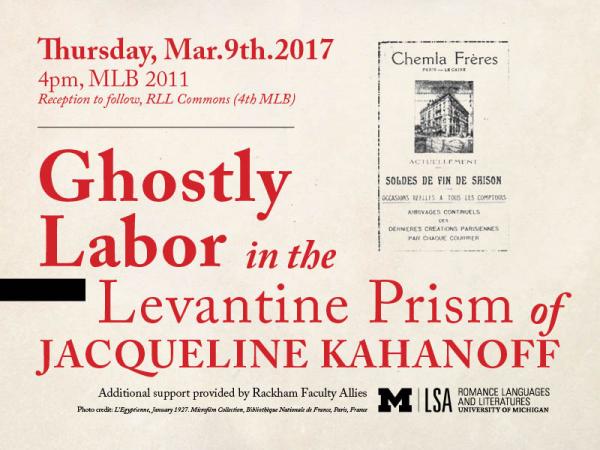 Living in colonial Egypt, Jacqueline Kahanoff had a unique experience shared by the members of her class and generation. Kahanoff was a Jewish Francophone and Anglophone writer from Egypt born to Tunisian grandparents who owned a famous department store. Taking the store as a model for citizenship, she suggests an alternative notion of Mediterranean culture and Egyptian identity, which sought to decentralize European hegemony, a notion which she later dubs “Levantinism.” Amr Kamal analyzes her 1951 novel, Jacob’s Ladder, to examine the process through which Levantine culture developed amid several competing imperial and nationalist projects. In particular, he shows how the novel’s depiction of Levantine spaces documents the marginalized role of the working class in the education of elite Levantine society and its acquisition of cultural capital. His analysis also explores how the construction and sustenance of a celebrated image of the Levantine past depended on the racialization of labor, or what he calls “ethnic classism.” Through this latter process, a labor force made up of other Levantines was Orientalized and relegated to the background where it served to highlight a European-like Levantine cosmopolitanism.

Amr Kamal is Assistant Professor of French, Arabic, and Comparative Literature, at The City College of New York, CUNY. In 2013, he received his PhD in Comparative Literature, from the University of Michigan, Ann Arbor. He is currently working on his book, Empires and Emporia: Fictions of the Department Store in the Modern Mediterranean.