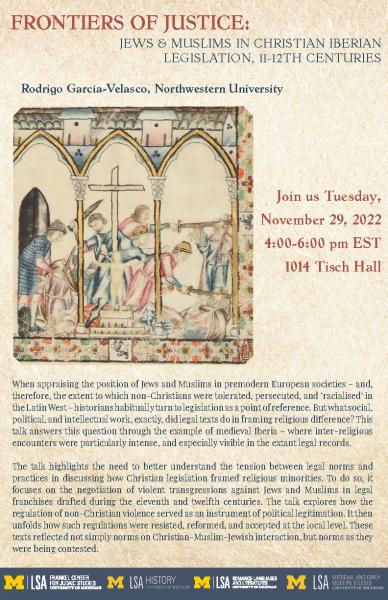 When appraising the position of Jews and Muslims in premodern European societies – and, therefore, the extent to which non-Christians were tolerated, persecuted, and ‘racialised’ in the Latin West – historians habitually turn to legislation as a point of reference. But what social, political, and intellectual work, exactly, did legal texts do in framing religious difference? This talk answers this question through the example of medieval Iberia – where inter-religious encounters were particularly intense, and especially visible in the extant legal records.

The talk highlights the need to better understand the tension between legal norms and practices in discussing how Christian legislation framed religious minorities. To do so, it focuses on the negotiation of violent transgressions against Jews and Muslims in legal franchises drafted during the eleventh and twelfth centuries. The talk explores how the regulation of non-Christian violence served as an instrument of political legitimation. It then unfolds how such regulations were resisted, reformed, and accepted at the local level. These texts reflected not simply norms on Christian-Muslim-Jewish interaction, but norms as they were being contested.