"I have always believed that the nurturing and respectful culture of the RC engenders long-lasting relationships and RC faculty represent more than “just” the subject that we teach. We are a way of teaching and reaching ..."
Janet Hegman Shier and actors from UM and Pioneer High School warming up in EQ A03 before Cabaret Tingeltangel, 1989 (Photo: David Shier)

A message from the RC Director, Catherine Badgley

Janet has academic roots in the study of Germanic and Slavic languages from several universities.  She has a BA in German and Russian from Michigan State University and a Master of Arts in German Language and Literature from the University of Michigan.  In addition, she has studied at Albert-Ludwigs Universität in Freiburg, Germany; at the University of Zagreb, Croatia; the Monterey Institute of International Studies in California; the Institute for Political Research in Wiesneck, Germany; the Goethe Institute in Dresden, Germany; and the Harvard Project Zero Summer Institute in Massachusetts.  She has language proficiency in German, Russian, and Croatian.

Janet started teaching at the RC in 1981 as a Graduate Student Instructor when she was a graduate student in Russian Literature.  She became a Lecturer in the RC in 1984 and since 1988 has been the head of the German Language Program.  A sampling of her courses includes Intensive German I and II, Contemporary German Theater, The Arts and Politics of Weimar Germany, Cultures in Dialogue: Crossing External and Internal Borders, first year seminars (The Self, the Other, and the Self as Other in Text, Image, and Performance), and From the Page to the Stage (Improvisation Seminar).  She collaborated with many RC faculty—including Kate Mendeloff, Barbara Sloat, Ann Savageau, Jennifer Myers, and Olga López-Cotín—in courses, workshops, and artistic endeavors.  Since 2002, she has led groups of students on study-immersion trips to Germany related to arts, theater, and intercultural dialogue.  She has extensive theater experience as a director and producer and frequent composer for plays and films in German theater.  She founded U-M RC Deutsches Theater in 1985 and led numerous plays and workshops for current students, alums of the program, and distinguished visiting artists.  Over several decades, she also served on many active RC committees.

Janet found in the RC the qualities that all of us value—a place of deep commitment to intellectual challenges, teaching, learning, collaboration, and engaging with the world at large.  Janet excelled in all of these ways and helped many of us do so as well.  In her own words, “The RC is more than “just” a college. RC administrators, staff and colleagues have always emboldened me (and others) to grow, to share, and to be confident. Because of this, I never really considered myself to be “just” a German teacher; the RC encouraged and accepted exploration that led to my most rewarding work here….  Theater kicked off my foray into other arts that I have integrated into my teaching: book arts, music composition, film, photography, cartooning, and painting. I’ve been able to model the process of “taking good risks” for my students. Teaching, advising, and doing creative work are now a way of life for me, which have made them not feel like work at all.”

Janet’s boundless energy and creativity were a palpable force in the academic and community life of the RC.  She leaves a multi-faceted legacy with a lasting impact on the character of the RC.  We wish you many creative adventures in the years ahead, Janet! 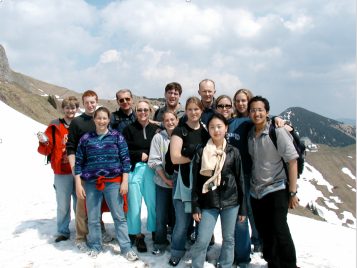 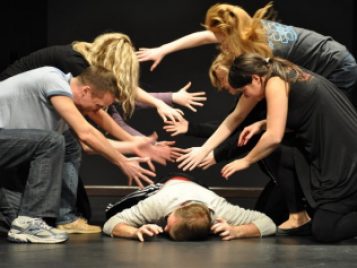 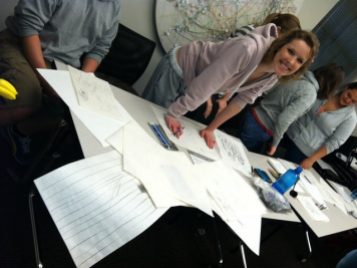 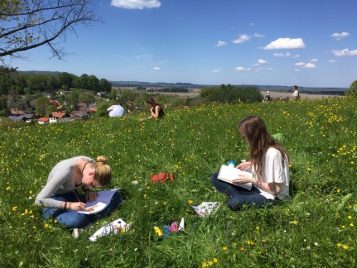 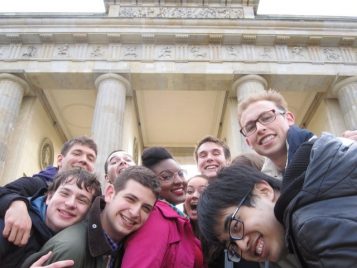 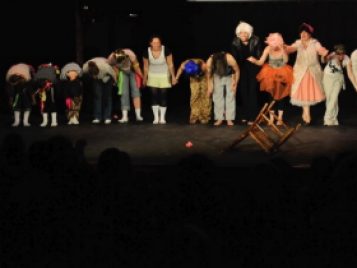 Janet's reflections on her career at the Residential College

It is hard to believe that I have taught my last intensive German class, directed my last play for RC Deutsches Theater, and led my last study trip to Germany. I have fond memories of every aspect of my work as a teacher, program head, and academic advisor in the RC. The RC gave me the community I looked for my entire life. I found a sort of home in the RC and found so many opportunities to embrace rewarding intellectual and artistic challenges through my work.

I’ll concede that retiring during a pandemic meant for me a departure that was more bittersweet, subtle, and anticlimactic than I had expected, but I am learning that the RC is for me as much a time as a place, and it remains in my very core. I could not be happier about the career I had, which included collaborations with over 40 different teachers and artists. I am fortunate to have been part of profound and impactful service learning projects, working with at risk children here and in Berlin; I loved co-designing and team- teaching courses like “Women’s Health Awareness” and “Cultures in Dialogue” and I loved the freedom of designing syllabi and developing interdisciplinary courses that involved scholarship, theater, and art, like my 2019 First Year Seminar “Roots and Routes: Journeys From and To The Self.” When Cecile Zorach invited me as a grad student to teach German at the RC, I could not have imagined the love I would develop for the RC. The satisfaction of witnessing students’ growth, the excitement designing and leading new initiatives, and the opportunities to work side by side with the best make the RC a special workplace. I will miss making new connections through my work and am grateful that I made so many in my time there!

Never could I have dreamt that I would forge such deep connections with students-turned-alumni-turned- friends. To me, creating a respectful learning environment and forming good relationships are what teaching is all about. It has been my honor to teach multiple siblings within families, to be invited to former students’ weddings, to their own and their kids’ birthday parties, to visit alumni in my travels, and to have them remain in touch with me long after they graduate. Recently, Deutsches Theater alumni (1985-2019) threw me a fun and exciting retirement party (the most fun Zoom event ever!), which included a dramatic reading, sharing of personal memories, and even a virtual video they made, featuring song, acting, and dance (such talent!). Zoom made it possible to connect with alumni all over the US, and from as far away as South Korea, New Zealand, Scotland, Netherlands, Germany and Bolivia. This helped me put retirement in the time of Covid-19 in perspective and it also perfectly illustrated how the RC is everywhere in the world. I learned at the Zoom party that I have “grand-student teachers”—this was defined as students of my former students, who are now teaching, passing on my tricks for learning. I have always believed that the nurturing and respectful culture of the RC engenders long-lasting relationships and RC faculty represent more than “just” the subject that we teach. We are a way of teaching and reaching, and a connection between generations of bright, humane, caring individuals. This, in turn, gives back to us and makes our work more meaningful---I could not be more grateful for this. I will miss being an active part of such a warm and nourishing community of scholars in a work environment that promotes growth.

I have encountered no teachers who care more deeply and teach more effectively than RC language teachers! To be part of such an incredible and unmatched cadre of committed, hard-working, and talented language teachers for such a long time has been a profound and rewarding experience. Truly, I found mentors and friends among the entire RC faculty and staff. In some ways, I feel as though I modeled the very process of taking good risks that we encourage of our students. I developed the confidence and drive to foray from theater into other arts that I then integrated into my teaching: book arts, music, film, photography, cartooning, and painting. RC Faculty members are given room and permission to grow and for this I will always be grateful. Doing creative work is now a way of life for me and I look forward to continuing my work in the arts well into retirement, always with a nod to the RC, the place that encouraged it. What continues to make the RC unique is its ongoing dedication to working towards common goals. The RC has always put students first and as long as this continues, the RC will thrive. I am proud of the RC, its faculty, its academic advisors, RC administrators, and RC staff. I’m proud of RC traditions and also the RC’s willingness to embrace change when that is called for. I am especially proud of my own students and alumni and the incredible work they have always done. In particular, working with alumni through RC Deutsches Theater intergenerational workshops, and remaining in contact with alumni when they visit me or I visit them continues to inspire me to want to be and do my best. To me, RC stands for “Relationship Cultivation” and “Radical Creativity” and especially in times like this, it helps to know that the RC is made up of leaders, who can think and do for themselves.

I know that I will miss teaching, I will miss dreaming up new projects (well, to be honest, I still do that!), I will miss creative collaborations, and I will miss conversations with colleagues and students. I will miss teaching in the classroom, coffee hours, laughing with students, and I’ll miss working with students at office hours. I will miss the Keene theater and study trips, both of which put students’ learning in a meaningful context. I will miss the excitement each new semester always brought, and I will miss teaching students their first German words or getting them to go far outside their comfort zone, speaking a new language, whether doing theater, traveling abroad, or painting with me. That said, I take solace in knowing that the RC is still the most exciting and personal place to be on U-M campus—a place that always throws out the welcome mat to all. RC Friends and Family, you have enriched my life and left me with memories to reflect on for the rest of my life. I hope our paths will cross again.

Thank you, RC. I will miss you!

P.S. I am creating a website where I will consolidate my documentation of U-M RC Deutsches Theater photos, trailers, and a film retrospective. I struggled with which photos to include for this retirement announcement, so if you'd like to see more, see this collage (zoom in!) and the (eventual hundreds of) photos on my website. The site will also contain examples of my large paintings on canvas, small fairy tale paintings, little books, and visual journals and blog posts on teaching, theater, and art. I hope you'll stop by.