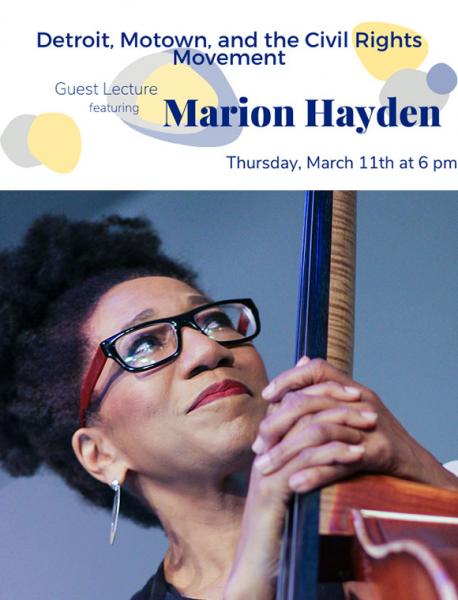 Join us for a lecture and discussion with distinguished acoustic bassist, Marion Hayden on Thursday, March 11th at 6 pm EST!

The city of Detroit's rich musical history has forever shaped popular music in the United States. The migration of jazz musicians to Detroit in the 1920s and 1930s caused the area to develop its own thriving music scene. By the 1960s, the area became known for the first black owned record label, Motown. Today, the name "Motown" is synonymous with funk and soul music.

Detroit was home to some of the most important events of the 1960s and 1970s Civil Rights Movement. Consequently, jazz musicians in Detroit have witnessed music's role in shaping race relations within the city and across the United States.

Join us for this lecture and discussion, where Marion Hayden will tell of her experiences as a bassist in Detroit. With her deep knowledge of the city's musical history, learn how Motown and jazz were musical vanguards in altering to the social landscape of Detroit, Michigan, and the United States.

Widely recognized as a standard bearer of culture and artistic history, Hayden received a 2019 Art X Grant and a Creators of Culture Grant for original musical works. She was Artistic Director for a 2018 Knight Arts Foundation Grant encouraging young women in jazz. In 2016 Hayden was honored for her work as a performer and educator with the prestigious Kresge Artist Fellowship- a 1 year fellowship and grant award given an elite group of creative artists. She was the recipient of a 2016 Jazz Hero Award.- a national award given by the Jazz Journalists Association- recognizing people who have made a significant contribution through their artistry and community engagement.

As an arts advocate, Hayden has served as Grant Panelist for the Detroit Council for the Arts and Cultural Affairs, Michigan Council for the Arts and Cultural Affairs, Art-Ops and the Highland Park Cultural Commission. She also serves as panelist or consultant for South Arts, Detroit Sound Conservancy, Charles Wright Museum of African American History, the Kresge Foundation, Jazz Education Network and Society of the Culturally Concerned.

A passionate advocate for youth music education, Hayden teaches for Michigan State Univ. Community Music School Detroit and is an educator in residence for the Detroit Jazz Festival. As well, she conducts the Next Gen Ensemble- a performing group of some of the areas best young musicians. Hayden holds faculty positions in the Jazz Studies Departments at University of Michigan and Oakland University. Hayden is the Bass instructor for the Geri Allen Jazz Camp, Newark, NJ. , and in 2021 will join the faculty at Centrum Jazz, Port Townsend, WA.

“It has been a privilege and a gift to learn and experience music in Detroit. The informal music education here is both thorough and rigorous and includes arranging, composing and production. The mentoring I received from the men and women in this music community was critical to my development as a creative artist. It instilled in me a sense of deep reverence and respect for music traditions, but also a fearlessness and openness about bringing those traditions forward in an original and authentic way. I express this creative openness through the projects and collaborations I engage in.”
Residential College
East Quad
701 E. University
Ann Arbor, MI 48109-1245
rescollege@umich.edu
Engaged Michigan Partner