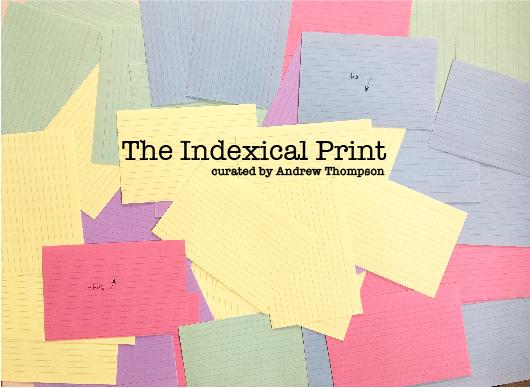 Join us for the Opening of the Exhibition: The Indexical Print
Curated by Andrew Thompson
Opening reception Friday January 17th, 5-6:30pm
Refreshments will be served
Free and open to the public

>> Information about the exhibit:
“...pronouns announce themselves as belonging to a different type of sign: the kind that is termed the index. As distinct from symbols, indexes establish their meaning along the axis of a physical relationship to their referents.”
Krauss, Rosalind, “Notes on the Index” 1977

Andrew Thompson is a sculptor and installation artist, educator, curator, and musician based in Southwest Detroit. Thompson grew up in Kansas City, MO and received his BFA in Sculpture from the Kansas City Art Institute. Thompson moved from Cowtown to Motown to receive his MFA in Sculpture from Cranbrook Academy of Art. He has been exhibiting his sculptures and installations throughout Southeast Michigan for over a decade and helps to curate and coordinate shows at a number of venues including as an exhibition committee member with Detroit Artists Market. He is a lecturer in the Stamps School of Art & Design and has taught at a number of other schools, most notably for one year at Antioch College in Yellow Springs, OH.
Residential College
East Quad
701 E. University
Ann Arbor, MI 48109-1245
rescollege@umich.edu
734.763.0032
734.763.7712
Sitemap
Facebook Twitter Instagram