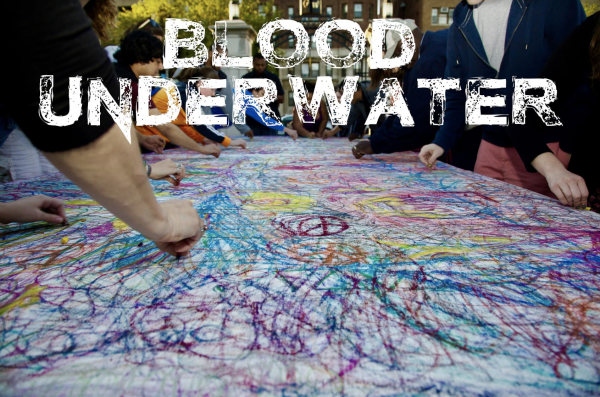 Elshafei Dafalla will be an artist in residence at the Residential College Art Gallery between October 28-November 1, working with RC students to realize new work for the exhibition, Blood Underwater (statement below), using the gallery as a studio space, and working primarily with pastels and canvas. There will be an opening reception November 1 from 6-8pm. The exhibition runs through November 22.

Eishafei Dafalla received a Bachelor of Arts in Sculpture from the College of Fine and Applied Art at Sudan University for Science and Technology in Khartoum, Sudan as well as a Diploma in Folklore from the Afro-Asian Institute at the University of Khartoum, Sudan. He earned a Master of Fine Arts from the Stamps School of Art and Design at University of Michigan. Elshafei has participated in more than fifty exhibits worldwide, and his work is part of public and private collections in Africa, Asia, the Middle East, Europe and the United States. He continues to lecture and to exhibit his work, holding artist residencies, participating in community building activities, and creating performative installation events around the U.S. and internationally.

----Water, as a natural resource, has been weaponized or made treacherous against people seeking safety and security. Some have been tortured or killed through waterboarding, others have been forced into oceans to die or disappear. Refugees across world regions have drowned crossing bodies of water in hopes for a better life.

The exhibition will be on display M-F, 10am-5pm, at the Residential College Art Gallery at 701 East University Ave., Ann Arbor MI 48109 November 4-22. Free and open to the public.

There will be an opening reception for Blood Underwater with Elshafei Dafalla in attendance on November 1 from 6-8pm, and refreshments will be served.
Residential College
East Quad
701 E. University
Ann Arbor, MI 48109-1245
rescollege@umich.edu
Engaged Michigan Partner
734.763.0032
734.763.7712
Sitemap
Facebook Twitter Instagram