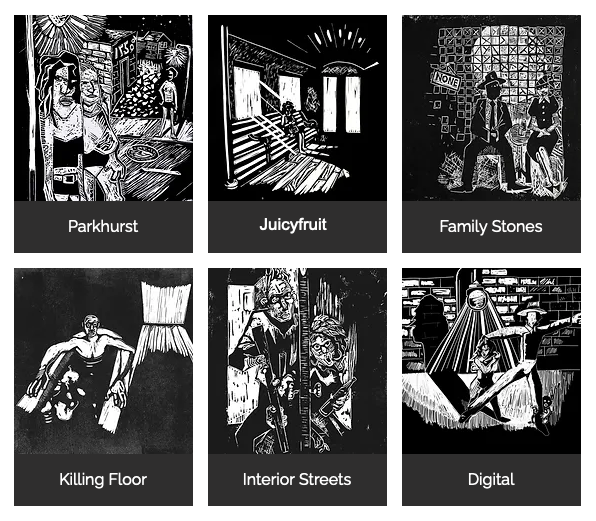 Carl Wilson is known for his stark black and white linocut prints. The self-taught artist sees himself as a documentarian of lives easily ignored in a world obsessed with materialism and celebrity. His work frequently highlights not only the strength found in conquering the everyday and mundane, but also the pain and defeat of those not able to rise to the occasion. His love of film noir and pulp fiction novels from the nineteen forties and fifties has led him to experiment with minimalist animation and comic book illustration. He embraces the whimsy hidden in the darkness.

Carl is the recipient of a 2013 Kresge Artist Fellowship and is an alumni of the historic Yaddo Artists’ Community. During his residency there he carved the prints for, and wrote the book, Her Purse Smelled like JuicyFruit, a recollection of his mother’s life. Carl was named 2014 guest curator of Detroit’s Carr Center. Also in 2014 Complex Online Magazine named him one of Twenty Detroit Artists You Should Know. He was featured in Essay'd, a monthly publication about Detroit artists. In 2017 Carl's work was a part of Detroit's contribution to The Saint-Etienne Design Biennale in France. 2017 also saw the release of a comic book, the first installment of his graphic novel, Dead & Lost in Detroit. Spring of 2018 saw Carl complete a residency at MacDowell in New Hampshire. While there he finished the writing and illustration of his graphic novel and currently the book is in negotiation for publication. The year has also seen the completion of a ten print collection based on James Weldon Johnson's Prodigal Son poetry. It was commissioned by Calvin College and Dr. Larry Gerbens.
Residential College
East Quad
701 E. University
Ann Arbor, MI 48109-1245
rescollege@umich.edu
Engaged Michigan Partner