A History of Physics From Galileo to Dark Matter 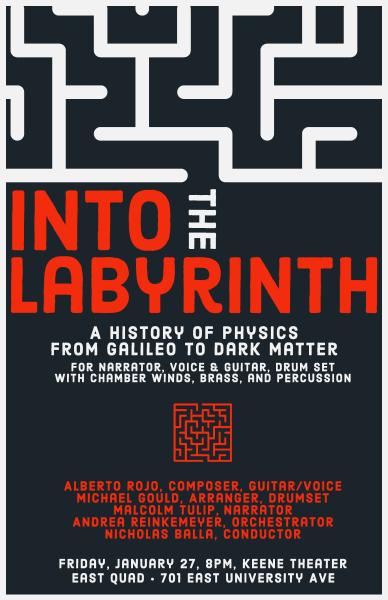 An interdisciplinary musical performance that highlights the turning points in the history of physics. The show combines fragments (excerpts from writings by some of the most prominent physicists in history) woven with Elfriede Jelinek’s writing which is read and interpreted by a narrator with original songs based on each fragment. The project explores the intersection between the arts and the sciences, and postulates the thesis that art and science are not antagonistic alternatives in the search for truth; rather, there is a broad territory of coexistence.

The main objective of the composition is to inspire an audience to become more engaged in arts and science by exploring the deep epistemological connection between art and science and at the same time using art as a facilitating vehicle for the teaching and communication of science.

The concert will begin with a short Q&A between Alberto Rojo, Michael Gould and Nicholas Balla followed by the premiere of the piece. The performance is located at the Keene Theater in the East Quadrangle on the University of Michigan central campus-701 East University Avenue. For more information contact Michael Gould (gould@umich.edu).

Alberto Rojo has written four books, numerous essays and popular science pieces (in Spanish), and lectures around the world on the connection between art and science. His latest book, The Principle of Least Action, History and Physics, written in collaboration with Anthony Bloch, was published in March 2018 by Cambridge University Press. As a musician, he released three solo albums and has collaborated with Latin American artists, notably Mercedes Sosa, with whom he toured extensively. He wrote and performed one of the songs of her Album Corazón Libre, recipient of the 2005 Latin Grammy Award for best folkloric album.

Michael Gould has received international recognition as a performer and scholar in the field of drumset, contemporary percussion performance and pedagogy. He has performed and given clinics all over the world. Michael has released over 100 educational percussion videos through playalongmusic.com. He has also composed and performed music for a wide range of ensembles and venues from the Münich Opera and Ballet to National Public Radio.

He has had unique collaborations with engineers, material scientists, painters, poets, dancers, athletes and business professionals. His book for the iPad-- The Drum Diaries is available worldwide through the Apple iTunes store. He is also the music director for Tangente Dance Company in Berlin, Germany. His piece Remember Me was recently performed at the Kunsthaus Dahlem in Berlin, Germany and includes dance, theater, percussion, electronics, and original artwork. He is currently Director of the Center for World Performance Studies at the University of Michigan.

If you are a person with a disability who requires an accommodation to participate in this event, please contact Center for World Performance Studies, at 734-936-2777, at least one week in advance of this event. Please be aware that advance notice is necessary as some accommodations may require more time for the University to arrange.
Residential College
East Quad
701 E. University
Ann Arbor, MI 48109-1245
rescollege@umich.edu
Engaged Michigan Partner