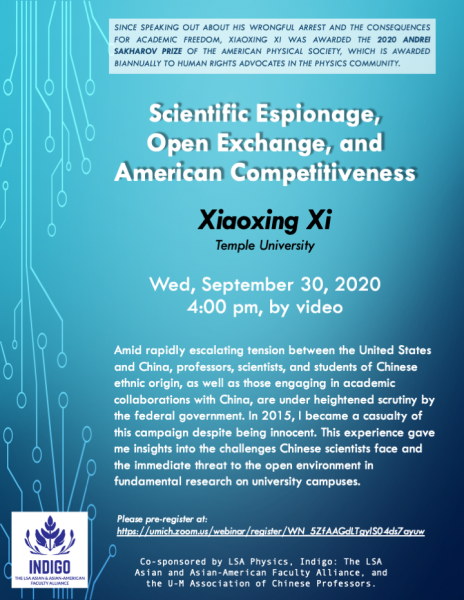 In 2015, Xiaoxing Xi was wrongfully arrested by the FBI in a case of alleged racial profiling. Since speaking out about his experience and the consequences for academic freedom, he was awarded the 2020 Andrei Sakharov Prize from the American Physical Society, which is awarded biannually to human rights advocates in the physics community.

Presentation abstract:
Amid rapidly escalating tension between the United States and China, professors, scientists, and students of Chinese ethnic origin as well as those engaging in academic collaborations with China are under heightened scrutiny by the federal government. Law enforcement officials consider collaborating with Chinese colleagues “by definition conveying sensitive information to the Chinese.” In 2015, I became a casualty of this campaign despite being innocent. This experience gave me insights into the challenges Chinese scientists face and the immediate threat to the open environment in fundamental research on university campuses.

In this talk, I will highlight the JASON Report on Fundamental Research Security, commissioned and endorsed by the National Science Foundation. It opposes profiling Chinese scholars based on the actions of the Chinese government and Chinese Communist Party, supports reaffirmation of NSDD-189, which made unrestricted fundamental research a federal policy and proposes addressing foreign influence on US research within the framework of research integrity. I urge the audience to rally around the JASON Report and speak up to defend liberty and safeguard America's research enterprise.

Co-sponsored by Indigo: The LSA Asian and Asian-American Faculty Alliance and the U-M Association of Chinese Professors.