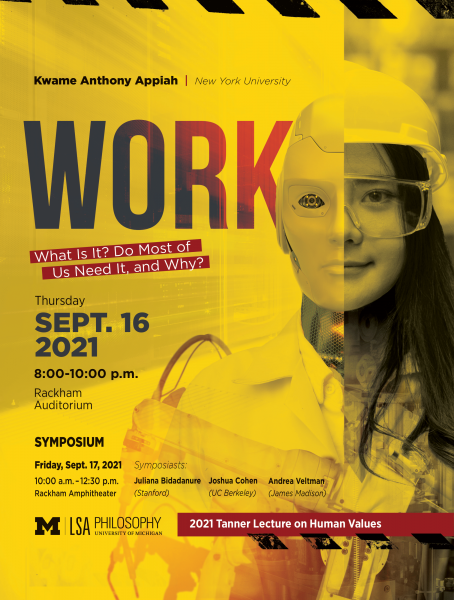 There are, I shall argue, three important areas of philosophical exploration about work.

The first is a question in social ontology: What is work? This question is both historical and conceptual, as questions in social ontology usually are. And the contemporary idea of work and of a job—and the related idea of a good job--are the results of conceptual and institutional developments over the last few centuries.

The second is an ethical issue, in Aristotle’s broad sense of ethics as concerned with eudaimonia: How does work fit into the good life? This problem is especially challenging because the idea of a good job involves many dimensions of assessment: Does it produce something useful? Does it make a positive contribution? Does it give the worker a decent income? Was that income fairly decided? Are the conditions of work satisfactory? Are they just? Does the job have the rewards of sociability? Is the work a source of significance for the worker?

Looked at more generally, the good job does four things: (a) it provides goods and services worth having, while also (b) providing people with income, (c) sociability, and (d) significance. And one of the things that makes the ethical questions especially challenging at the moment, is that new technologies are reconfiguring employment in ways that appear to threaten the creation of jobs that do all four of these things well and do them through one job.

Human flourishing requires all of these things: products, services, incomes, sociability, significance. For many people over the twentieth-century providing a good job played a huge role in delivering all of them. But AI and robotics may produce a world in which products and services could increasingly be produced without providing employment for most people: and that means either that we must find a way of providing everyone with the resources for a dignified human life without sharing the social product through the labor market, or we must invent income-generating activities that we don’t need for the products or services they provide. We might want to do the latter because many of us would not know how to fill our lives with significance or find social groups outside the family with which to engage unless we were involved in some organized productive activity.

These are issues on which many popular writers on the “Fourth Industrial Revolution” and on globalization have, of course, written for some time. But we need more serious organized reflection on the normative issues raised by these challenges.

And that leads to the third cluster of concerns: How should law and other sources of normative authority be configured to allow work to contribute to the flourishing of workers, and how should the opportunities and rewards of work be shared? Like Aristotle, I think we need to get the ethics right to do the politics, but I also think that, precisely because we are, as he insisted social animals, it is hard to pry them apart.

In this lecture I shall focus on the central set of ethical questions but say some things in passing about the social ontology of work at the start and the politics of employment at the end.

Kwame Anthony Appiah is Professor of Philosophy and Law at NYU. Earlier, he taught at the University of Ghana, Cambridge, Yale, Cornell, Duke, Harvard and Princeton. He grew up in Ghana and received undergraduate and doctoral degrees in philosophy from Cambridge University in England. His work has been in the philosophy of mind and language, ethics, political philosophy, and the philosophy of art, of culture, and of the social sciences, especially anthropology; as well as in literary studies, where he has focused on African and African-American literature. He served as President of the Eastern Division of the American Philosophical Association (2007). In 2012, President Obama presented him with the National Humanities Medal. His publications include Cosmopolitanism: Ethics in a World of Strangers and The Lies That Bind: Rethinking Identity. Professor Appiah writes the weekly Ethicist column for the New York Times Sunday magazine.