During the Eocene, a group of early whales known as archaeocetes swam the oceans. These whales came in vastly different shapes and sizes, from the gigantic, serpentine Basilosaurus isis to the smaller, stouter Dorudon atrox. About the size of the modern beluga whale, Dorudon atrox is an important find for scientists. It's skeletal structure resembles modern whales, but retains some features that give clues about how this group of successful marine mammals evolved from land-living ancestors.

Largely discovered in ‘Zeuglodon Valley,’ a large part of the Sahara desert also known as the ‘Valley of the Whales,’ Dorudon atrox was first mistaken for a juvenile Basilosaurus. It wasn’t until the mid-1800s that Dorudon was given its name and recognized as its own species. 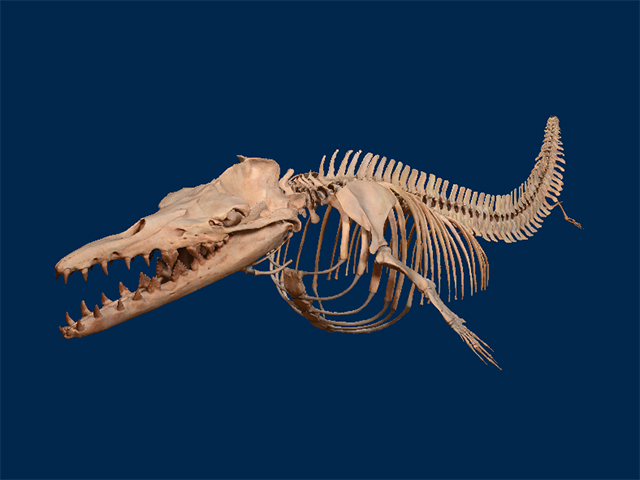 Having lived in shallow ocean environments, Dorudon was well built for underwater survival. Its incisor and canine teeth were sharp and pointed, and placed along its entire mouth. This is different from the incisor and canine teeth of a dog, which sit close together at the front of their mouths. This line of sharp teeth meant Dorudon could easily grab fish swimming by for a quick meal. Along with its strong toothy bite, Dorudon atrox was also believed to have powerful hearing. Special changes to the ear canal and skull meant Dorudon could hear many different frequencies and trace the direction they were coming from.

There is evidence that while it was an important marine predator in the middle and late Eocene, young Dorudon were often prey for the larger basilosaurid Basilosaurus.

This water-dwelling predator also had a body built for hunting in the ocean. Its forelimbs were of no use helping Dorudon on land. Instead, they actually helped steer while its muscular lower body helped push it through the water. Unlike other early whales which moved much like an eel, Dorudon relied on moving its tail, or fluke, up and down to propel it through the water, much like how today’s dolphins swim. This new way of motion meant the hind limbs were essentially useless.